My sophomore year of high school I found out what a podcast was. Before that I had the app in a folder called “Don’t Touch” on my phone but once I listened to one I instantly hooked. I listened to season 1 of “Serial” first (aka the gateway to all other podcasts), loved it and decided to listen to something similar called “S-Town.” S-Town starts off as a story about a antique clock mechanic in Alabama with a maze in his backyard and becomes totally different when a murder and suicide happen. To this day, it is still the craziest twist in a story that I have ever experienced. Until this article…

I started off making a model called Air Yards Over Expected using machine learning based on data from the past 5 NFL seasons. I wanted to take in a bunch of variables, give the expected air yards (the amount of yards a ball in the air travels on a throw) and then see which quarterbacks were the most and least aggressive. Much like S-Town, this article starts off as a routine data analysis but turns into a full-blow conspiracy theory in no time.

Below are the features I used to make my expected air yards model ranked by how much influence they had over the algorithm (I include the link to the code at the bottom if you want to make this model to!):

Aftering running my model, I was able to get the average Air Yards Over Expected (AYOE) for every quarterback during the 2020 NFL season to measure each quarterback’s aggressiveness. Here are all the quarterbacks that had over 180 pass attempts:

So now here’s the twist I alluded to at the beginning. (If you’re just here for the statistics you can just skip).

Are we sure Tom Brady isn’t juicing? There is no way a 43 year-old quarterback should be leading the league in AYOE, especially considering QB’s his age like Rivers, Roethlisberger, Brees and Alex Smith all had negative AYOE’s. Here is the full case for Brady juicing (this is half-joke and half-serious):

Or the alternative is that I could just accept the fact that Brady treats his body like a temple more than anyone else and that’s how he’s been able to do what he’s doing but it is surprising how stark of a difference he has compared to everyone else his age.

Anyway, I was really happy with how AYOE turned out. It confirmed a lot of priors like Russell Wilson and Josh Allen being aggressive while Drew Brees and Alex Smith playing more conservative. It also correlates well with an already established statistic like Expected Points Added per Pass (EPA/Pass): 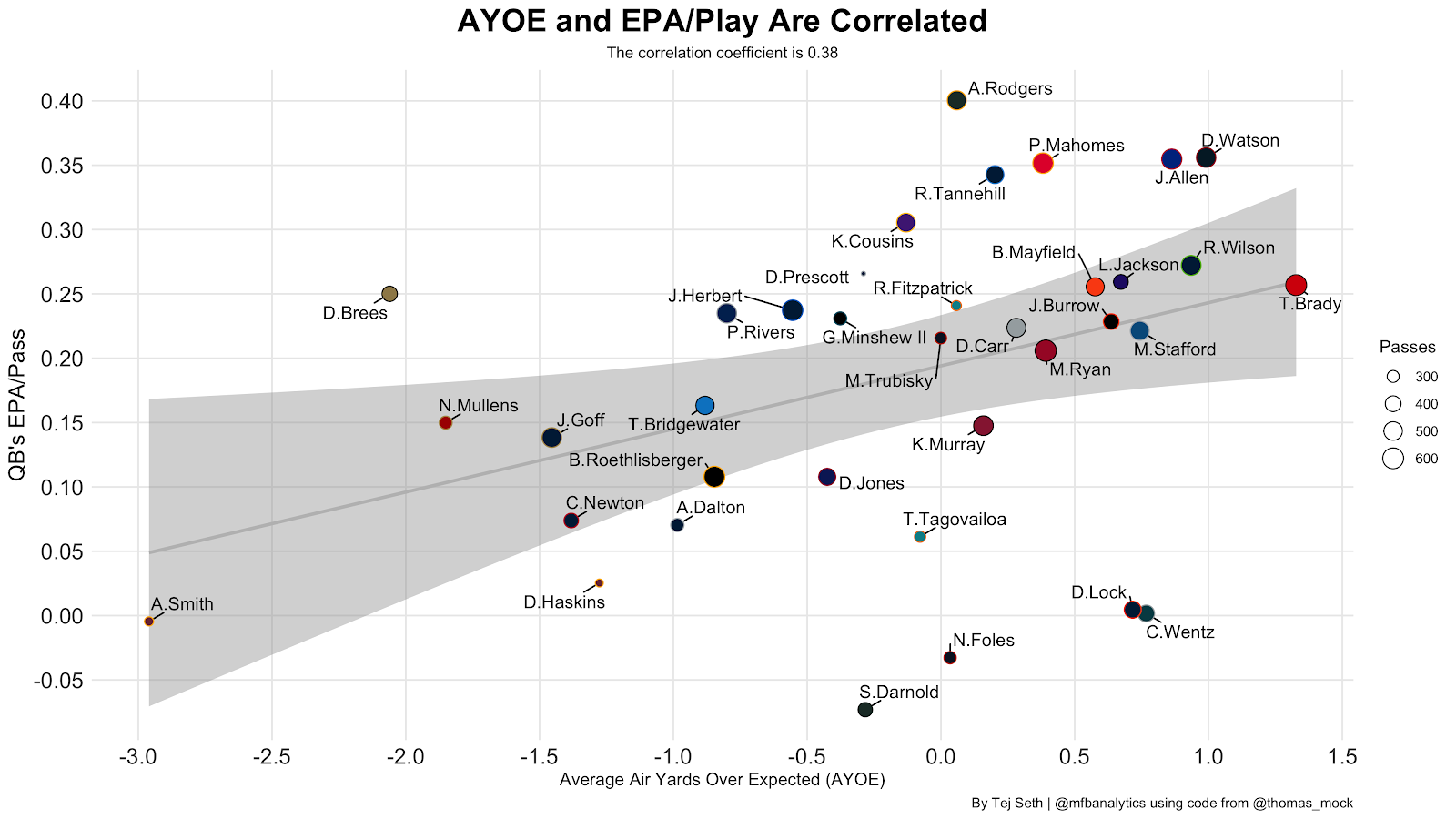 Despite Alex Smith trying his best to ruin the scale on that graph, the correlation still looks pretty good. To see how bad Alex Smith’s AYOE actually was in 2020, we can look at each team’s expected air yards per pass compared to their actual air yards per pass: 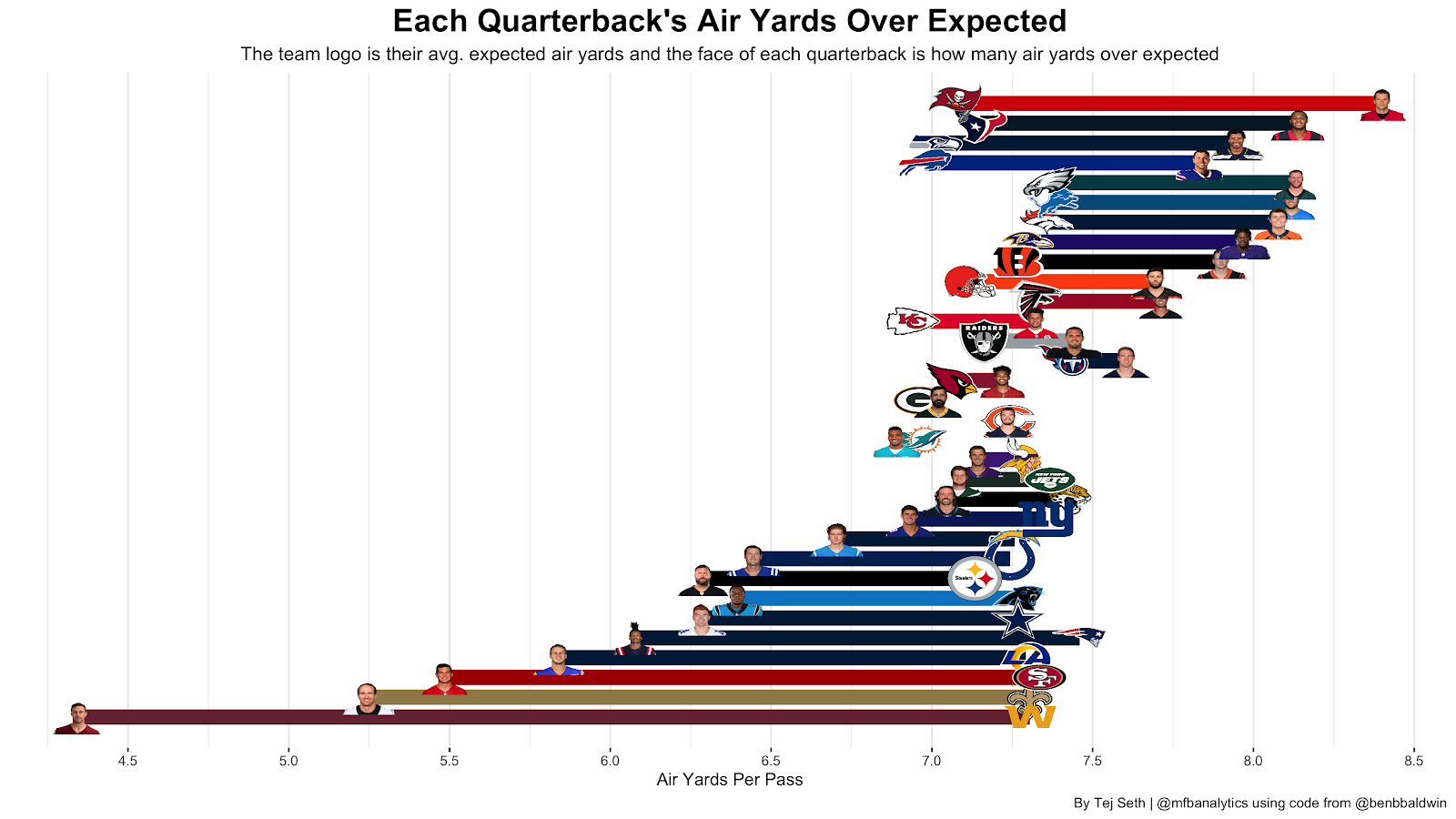 And finally, here was each quarterback’s total air yards over expected during the 2020 regular season: 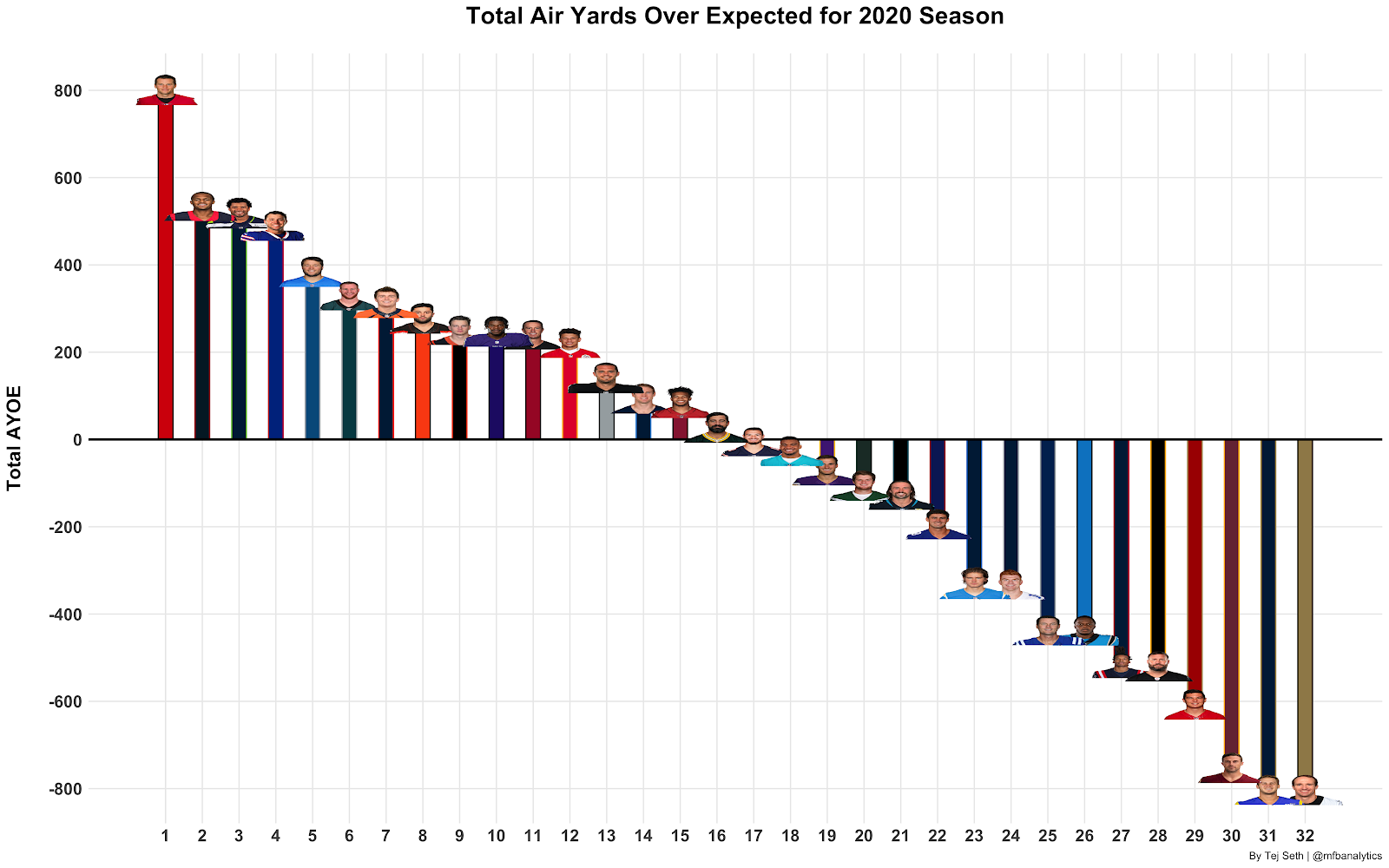 As a huge Stafford fan, I’m really interested to see how he does if he gets traded to the Rams, 49ers, or Colts because those team teams are replacing quarterbacks with largely negative AYOE with a gunslinger in Stafford who’s top-7 for AYOE.

That’s all I have for today! If somehow made it past the Brady conspiracy and to the end of the article, I hope you feel accomplished.