As seen in the chart below, throughout the last five years, running outside the tackles has led to a significant amount more yards per carry than inside runs: 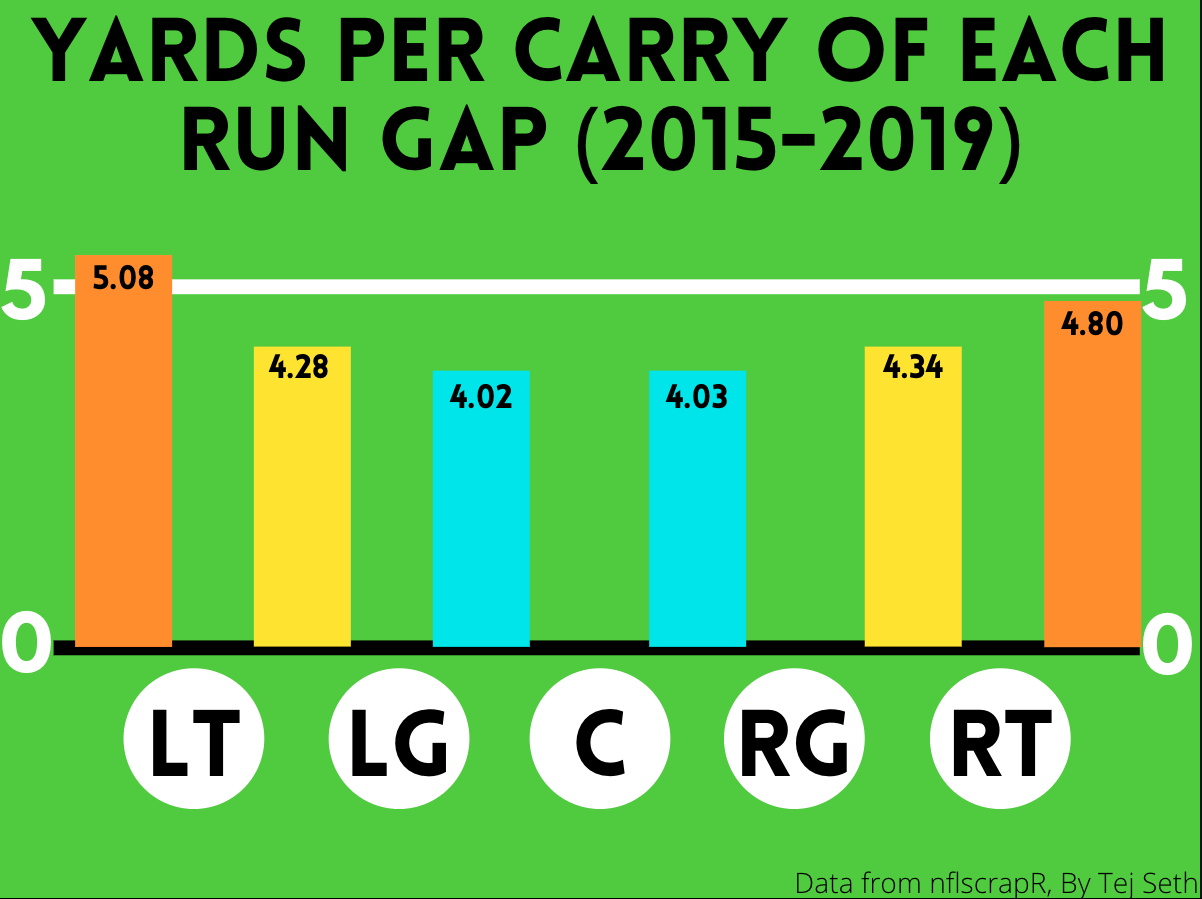 Once you get past the fact that my color palette looks like a “Tropical Skittles” pack, it turns out my mom had some great advice for NFL teams. Running outside is a lot safer to her and a lot more successful in the NFL. However, yards per carry as a state isn’t perfect because it treats all yards equally. There are metrics out there, however, that place more importance on a 2 yard rush on 3rd & 2 than a 3 yard rush on 1st & 10. That’s where success rate and expected points added (EPA) come into play:

With those stats in mind, it brings us to the main table this article revolves around. In this table, I used over 43,000 non-quarterback runs since 2015:

In every statistical category, whether it’s EPA/run, success rate or yards per carry, rushing outside of the tackles (aka the “end” gap) has proven to be the best despite being utilized the least. Looking at year-by-year splits of success rate, runs through the end gap have been 6% more successful, on average, than inside runs:

However, when there’s a strong reward, there usually is risk involved also. Looking at the box-plot below, we can see that end runs have the highest range of outcomes between the bottom of the box (25th percentile) and the top of the box (75th percentile). I also included a dot to represent the average EPA for each run gap:

Since it is already generally known in the analytics community that pass plays are more explosive than run plays (hence why pass plays have a positive EPA/play and run plays have a negative EPA/play), I would advocate that if teams were going to run anyways, they might as well try to hit the explosive play and use a run outside of the tackles. Even though the range of outcomes with end runs is wider, teams should try for high EPA runs and the end run gives most teams the best chance to succeed in that goal. When we look at density ridges we can truly see the range of outcomes for each type of run gap:

While inside runs (tackle and guard gaps) are dense in the -1 to 0 EPA section, end runs have a flatter curve which means they have more runs that get +1 EPA and more. It might be hard to see the differences in the curves but think about it this way: the density curves for the tackle and guard run gaps represent the typical happiness of a Lions fan as our peak excitement is usually in week 4 before it all comes crashing down. The density curve for runs through the end gap represents the happiness of Saints fans as the peak might not be as high because the team is supposed to go to the playoffs and once they make the playoffs, the happiness slowly fizzles out with a first-round exit.

Speaking of being a Lions fan, my team’s season is often over by week 8. Since I am the new, self-proclaimed face of outside runs in football, I will root for whichever team uses the most of these runs. Since 2015, this is how it’s broken down with the x-axis being the number of times a team called runs through the end gap and the y-axis being their EPA per rush on those end runs:

So I guess I’m also an Eagles fan now? (I am beyond excited to see Eagles fan Dan Orlovsky on ESPN every day advocating debating quarterbacks by picking the smallest sample size possible of TD:INT ratio vs. playoff teams!)

Also, this graph doesn’t bode well with me advocating for more outside runs. I think that since the Red*****, Falcons and Eagles ran end runs over 100 times more than the next closest team, they became too predictable in their running game. If we factor out the predictable teams and look on a scale of EPA per rush on all rushes (guard gap, tackle gap and end gap), this is how it looks based on the number of end runs:

It turns out much better and has a more positive correlation despite my Detroit Lions doing their best to throw off this graph. Teams like the Cowboys, Chiefs and the others in the 1st quadrant have used end rushes more than 400 times since 2015 and have had an EPA of better than average (-0.03) in that timeframe. The Browns, Jets and Broncos have been the worst since 2015 using less than 350 end runs and having an EPA well worse than the average.

This brings us to the state of end rushing in the NFL in 2019 and as we look ahead to the new season:

Lots of storylines to unpack here:

All in all, throughout this data analysis I have found in the last five years that outside runs (runs outside the tackles or through the “end” gaps) were the most efficient, explosive and successful of any type of run. At the beginning of the article, we saw end runs be ahead of inside runs in every statistical category. As the article went on, team plots started to show that the more often an end run happened, the higher EPA/rush the offense had as a whole. Finally, we can see below that between 2015 to 2019, there were only three teams that were worse at end rushing than running the ball in general:

Teams like the Titans, Steelers and the rest of the teams down that list were losing out on as much as 0.16 expected points added every time they didn’t run around the end and instead ran through the tackles. I’m not advocating for every run to be outside of the tackles because we saw how being predictable hurt the Eagles but I think that NFL teams that have EPA per end rushes should be utilizing the outside gap more than the 31.7% that they are right now.

Thank you so much for reading and making it through the swamp of charts!