It might be the kool-aid talking, but in the upcoming NFL season I fully expect my Detroit Lions to have the NFC North’s best offense. With Matthew Stafford under center and Darrell Bevell calling the shots as offensive coordinator, the Lions offense soared last year. The defense was where the kool-aid evaporated as Matt Patricia dealt with locker room turmoil and injuries leading to one of the worst defenses in the NFL. As seen in the EPA/play chart below, up until Stafford’s injury in week 9 the Lions offensive EPA/play was 9th best in the NFL but their defensive EPA/play was 27th. 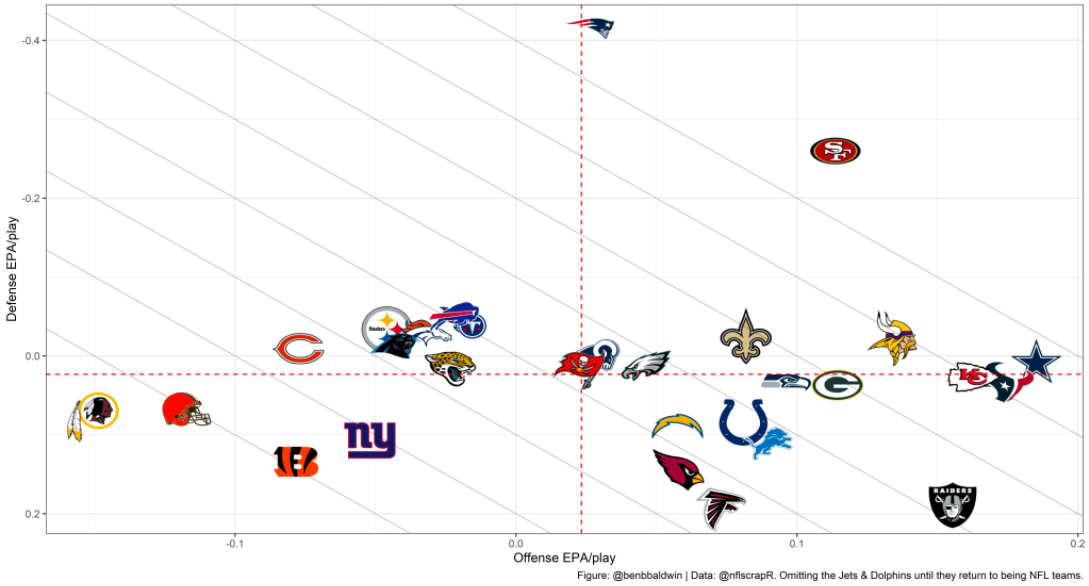 Even though the Packers and Vikings ranked slightly higher in offensive EPA/play in this graph, I think the Lions will make the jump to 1st this year due to having a top-10 quarterback in the NFL and talented supporting cast. Last year in EPA/dropback, Matthew Stafford ranked 3rd in the NFL at 0.18 while Kirk Cousins ranked 12th at 0.12 and Aaron Rodgers ranked 17th at 0.11 (Mitchell Trubisky is not to be forgotten all the way down at 27th with 0.07). Going position-by-position, the Lions rank very highly in almost every important positional group:

Quarterback: 1st- Using some statistics from last season, Stafford showed he should be the NFC North’s best quarterback (CPOE = Completion Percentage Above Expected):

Offensive Line: 2nd- Using PFF grades from last season, the Packers finished 6th in the NFL in offensive line grades, the Lions finished 11th, the Vikings finished 19th and the Bears finished 25th. The Lions have a good chance of staying put at 2nd in the division by replacing Rick Wagner with Halapoulivaati Vaitai.

Wide Receivers: 1st- In Max Gerber’s (@maxgerbs) metric called “Offensive Contribution Score” (a statistic that equally weights yards, touchdowns, receptions, turnovers, drops, and other stats to create a composite score for all offensive skill positions) the Lions easily had the best wide receiver trio in the division from last year. Put that together with the Vikings losing Diggs and the Packers not making any splashes in free agency or the draft and it’s looking good for the Lions to repeat as best again.

Tight End: 2nd- For this one I have to go off of a lot of speculation but with Kyle Rudolph as the division’s best tight end, I believe Hockenson will be the 2nd best. The Packers lost Jimmy Graham to the Bears and will have to start Mercedes Lewis or rookie Josiah Deguara at tight end. The Bears currently have 10 tight ends on their roster right now so almost no one knows what their plan is at that position. Is trotting out all 10 tight ends and Nick Foles at the same time a possible situation?

There we have it: The Lions rank 1st at an offense’s most important position and also 2nd in the three other groups. The defense, on the other hand, is worrisome. The Lions turned over half of their defense drafting Jeff Okudah at 3rd overall and signing Desmond Trufant from the Falcons. However, the Lions still haven’t fixed their pass rush and don’t have enough talent to compete with Khalil Mack, Eddie Jackson and others on the Bears, the Smith Bro’s on the Packers, or the star safeties of Harrison Smith and Anthony Harris on the Vikings. Despite adding veterans Jamie Collins and Duron Harmon and rookie Julian Okwara, the Lions defense probably won’t be good enough to finish in the top half of the division. Just based off of last year’s performances and offseason moves, this is how I see the division rankings in both offense and defense:

So after all that, we are left with the question that started this article: in the past, how have teams fared with the best offense and worst or second-worst defense in their division? Since 2016, I found nine teams that fit these rankings when it comes to DVOA. DVOA breaks down every play of a season to find the average success rate and compares teams based on how well they stack up to the average when adjusted for opponents. The nine teams that fit the Lions projected DVOA rankings are the 2019 Seahawks, 2018 Chiefs, 2018 Packers, 2017 Patriots, 2017 Chiefs, 2016 Titans, 2016 Raiders, 2016 Cowboys and 2016 Falcons.

The Seahawks were the only team in 2019 to have the best offense in their division and the worst or second-worse defense. I honestly see the 2019 Seahawks as the Lions’ ceiling in 2020. Stafford isn’t as good as Russell Wilson, but might be able to play at an MVP-level if he maintains his 2019 form. That would likely put the Lions offense top-5 in terms of DVOA. On the other hand, the Lions defense isn’t talented enough to be in the top-half of NFL defenses but could hover around 18th if a lot of the pieces come together.

In Patrick Mahomes’ first year starting as quarterback for the Chiefs, they had the best offense in the NFL while having the 26th best defense. They were able to win 12 games and make the AFC Championship despite their weakness on defense.

The chances of the Lions having the NFL’s best offense are slim, so the 2018 Packers might be a better look at what to expect this upcoming season. The Packers had the 7th best offense and 29th best defense and went 6-9-1.

Hey look it’s our very own Matt Patricia and his 2017 defense that ranked 31st in DVOA in 2017! I’m sure he’ll never have a horrible defense again when he comes to Detroit despite working with less talent and not having Bill Bellichick. Like mentioned earlier, the chance of the Lions offense being #1 in the NFL is slim but it is becoming clear it doesn’t matter how bad your defense is as long as you have a great offense. This Patriots team made the Super Bowl and Matt Patricia left a week later to become the Lions head coach.

The Chiefs won their division with the NFL’s 4th best offense and 30th best defense.

After looking at a total of nine cases since 2016 of a top offense and a bad defense, that leaves us with some final stats:

So if (and that is a big ‘if’) the Detroit Lions finish with the 5th ranked offense and 25th ranked defense in DVOA, we could expect 9 or 10 wins.

What the Lions (and every team that is better on offense than defense) have going for them is a team’s Offense DVOA explains 45.4% of variation in wins while a team’s defense DVOA only explains 19.2%. This is because a team’s defensive performance is highly dependent on the other teams’ offense so it is better to be better on offense because it allows you to control games better.

Additionally, if I take the difference between offensive and defensive DVOA ranks (to see how many spots their offense ranked higher than their defense), there is a very good correlation with having a better offense and winning more football games:

After doing this research, I will sleep easier tonight knowing in general teams are more successful when their offense is better than their defense. As discussed throughout the article, the Lions have good potential to have a highly ranked offense and a lackluster defense which is reassuring after seeing how offensive rankings are able to control wins more than defensive rankings.

But knowing the Lions, I’m sure they’ll surprise me and all of a sudden have a top 10 defense and a bottom 10 offense making this article completely useless.