The scene is a high-end restaurant in New York City in the 1850’s. Chef George Crum had just made french fries and gotten them sent back as a picky customer claiming they were “too thick.” Out of spite, Crum sliced a paper-thin batch of french fries, fried them to a crisp and seasoned them with a lot of salt. The customer loved them. Crum had just accidentally made the first-ever potato chips.

Similar to Crum, I started out making a “Post-Game Forecasted Score Model” using advanced statistics from each NFL game. In a particular game, if a team did something that was unsustainable but their advanced metrics were low, their post-game forecasted score would be lower than their actual score. I found that in football, there are certain factors that can be attributed to luck and ones that could be attributed to skill. I was going to stop there as I thought that was good enough. But as I looked at it more-and-more, I realized that I also accidentally created a projection system that could try to predict the scores of NFL games before they happen. My accidental creation may or may not have the same influence on the world that potato chips do; only time will tell. Let’s dive in (and there will be betting advice at the end for those who stay)!

First off, I built the post-game forecasted score model using linear regression of over 2,500 past games and seeing which factors most strongly influenced the scores of games. Here are the factors ranked  by influence (with their R^2 in parentheses):

Using all of those factors, we can see the post-game forecasted points for week 13 of the 2020 NFL season:

The Patriots have the biggest residual on this graph and for good reason. While the Patriots were forecasted to score 26 points because of a strong showing from their offense, they also had a punt return for a touchdown and blocked field goal returned for a touchdown which are things they can’t expect to happen every week. Because of that, their actual score was 45 points. The Chargers on the other hand, who have been cursed ever since Justin Herbert had his head shaved, were forecasted to score 8 points but ended up with 0. Looking at some other games, the Jets were forecasted to out-score the Raiders by 3 points but because of Gregg Williams’ defense I like to call “Tank Cover 0 Blitz,” the Raiders had essentially a miracle to win a game that they probably shouldn’t have won. 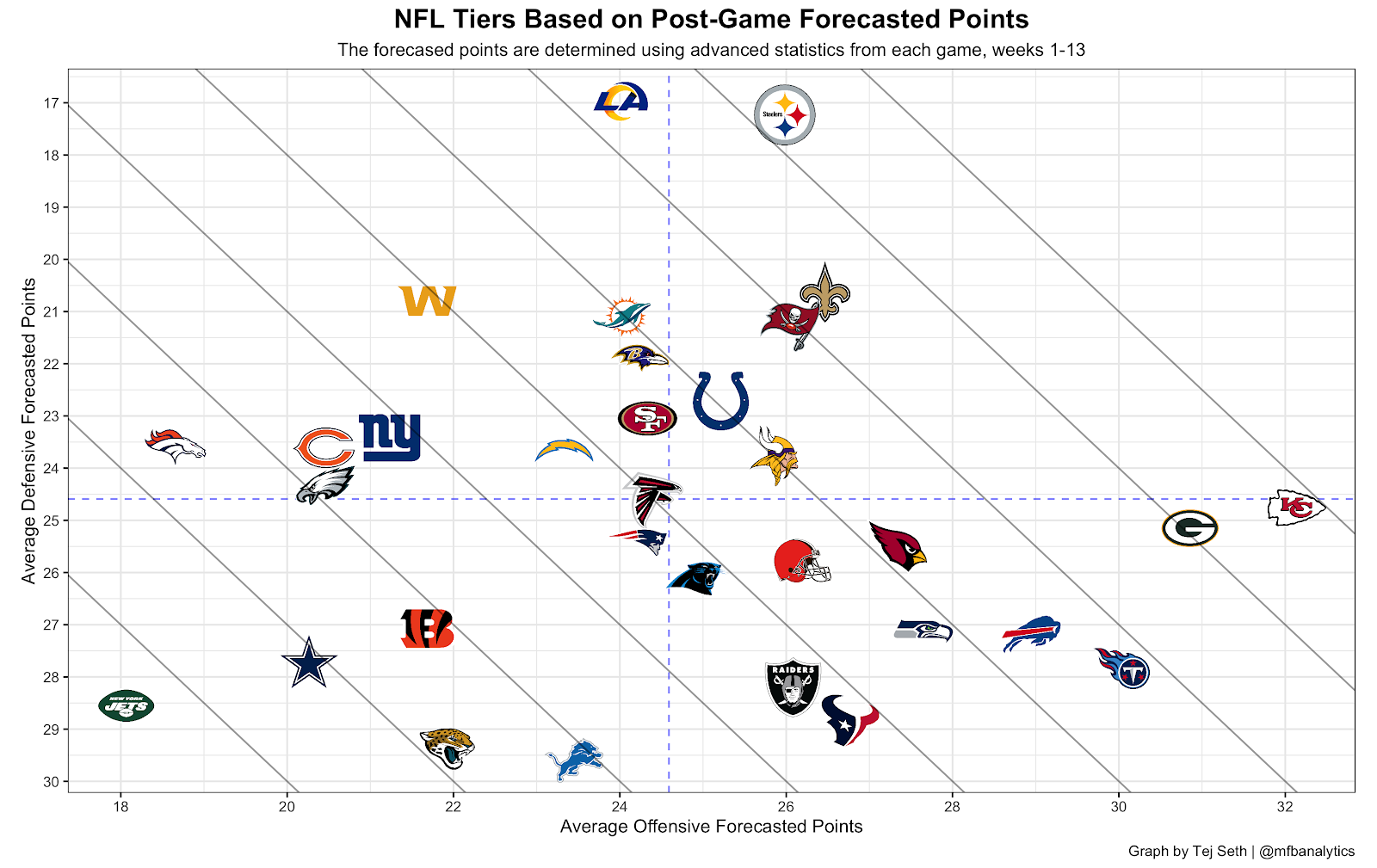 I believe this is better than just using average points because this takes out a lot of the fluff and focuses on statistics like EPA that will remain stable throughout the year and have been shown to be predictive. Through 13 weeks, the Chiefs, Packers and Steelers have emerged as the best teams in the NFL. The Saints with Taysom Hill (aka Mormon Manziel), Rams and Buccaneers are not far behind. On the other side, the Jets and the Cowboys have shown they are the NFL’s worst. Here’s where I realized I could start to project the scores of future NFL games.

Research has been done to show that a team’s offense has 2x the amount of influence over a team’s defense in any game. So using that we can come up with a formula:

And this is really fun to play around with for hypothetical matchups. If we get my dream Super Bowl of Patrick Mahomes with Russell Wilson we can project the score like this:

A score of 31-27 seems fair for a Chiefs-Seahawks Super Bowl, especially one in which Russell Wilson is cooking. Or since it’s 2020 and crazier things have happened how about the Cleveland Browns vs. my Detroit Lions in the Super Bowl?

I wouldn’t like the result but I would just be happy to be there.

I started calculating some of these for the upcoming NFL games in week 14 and realized that I was getting scores that were very close to what the Las Vegas sports books were projecting for each game. So without further ado, here are all my projections for each NFL game and a little explanation on some of them to why I think the score is projected that way:

I personally don’t bet because after watching “Uncut Gems” with Adam Sandler I decided I never want to experience that much anxiety while watching football, but I figured other people might find this helpful. Out of the 16 NFL games this week, 14 of my projected score differentials were within +/- 2.5 points of the Vegas spread. I took this as validation I was doing something right. My model only differed strongly from Vegas in two games:

There are the NFL projections for week 14! They will be updated at the twitter account @mfbanalytics if anything changes. Please feel free to give feedback as I can turn this into a weekly thing if enough people like it. And remember, the betting guide is only responsible for the bets you win and not the bets you lose!

4 thoughts on “Projecting Every NFL Score for Week 14”