Pittsburgh Steelers Quarterback Ben Roethlisberger had a tough 2020, to say the least. He started 2020 off by having to go through rehab for an elbow tear. He then had to hear his preseason number one wide receiver get called “Boo Boo Smith-Schuster” by his former number one wide receiver, Antonio Brown. Although the Steelers got off to a fast start, his receivers would just never stop dancing. On top of that, because of COVID scheduling the Steelers lost a perfect bye spot in week 8 and had their bye moved to week 4, earlier than any NFL team. On the other side, Tom Brady seemed to be enjoying himself. He lives in warm weather now and has led his team to their first playoff appearance since 2007. From the outside looking in, it looks like Tom Brady’s 2020 season has been going much better than Big Ben’s. However, I have developed a stat that isn’t perfect but can show some light into how valuable a quarterback is to their team. Introducing PWAA or Passer Wins Above Average which shows Big Ben has been more valuable than Tom Brady this year:

Using linear regression with 4 non-quarterback variables, I was able to predict how many wins a team would get if they had an average QB and then added their QB on top of that to get their actual wins Here are the non-quarterback factors that go into it and how much influence they have on a team’s final record:

Just by using those 4 statistics, a team’s projected wins with an average quarterback (think Teddy Bridgewater this year) can be spit out. We then can add their actual wins on top of those projected wins to get how many winners a QB added to their team. Here it is in table format for you readers out there (the quarterback who played the most snaps for their team qualified which is why Trubisky and Haskins didn’t make it):

For example, with the Chiefs having an average defense, elite receiving, a good rushing game and middle-of-the-league pass blocking, an average quarterback would have won 9.8 games with them. Confirming my priors of Patrick Mahomes being the best quarterback in the NFL, he won 14 games giving him a league-leading +4.2 PWAA. Let’s take a deeper look:

PWAA has its flaws as sometimes luck influences wins one way or another and strength of schedule isn’t considered. However, EPA/play has been proven to be one of the best stats when evaluating quarterbacks as it is somewhat stable and predictive (https://mfootballanalytics.com/2020/04/06/which-qb-stats-are-the-most-important/). PWAA and EPA/play have a good correlation (0.34 R^2) which means PWAA is doing a good job of capturing QB play.

My data goes back to 2013 where we can look at how each team as fared with their projected wins with an average quarterback compared to their actual wins:

Surprisingly, it’s been the Seahawks and not the Patriots that have had the best supporting cast around their quarterback the last 7 seasons. The Jaguars, Jets and Raiders all stand out as the 3 worst franchises in recent NFL history. The Buccaneers also pop out on this graph as they would have won 8 games a year with an average quarterback but have only won 6. Let’s take a closer look at them:

Although I talked about how Tom Brady has just been average in 2020, that’s all the Buccaneers needed to be successful. In 2019, they would have won 11 games with an average quarterback but because of YOLO play from Jameis Winston they came out with a 7-9 record. This year is a similar story but Brady hasn’t been just enough to keep them at that 11-5 mark and into the playoffs. In fact, no one has had a larger cumulative PWAA than Tom Brady since 2013: 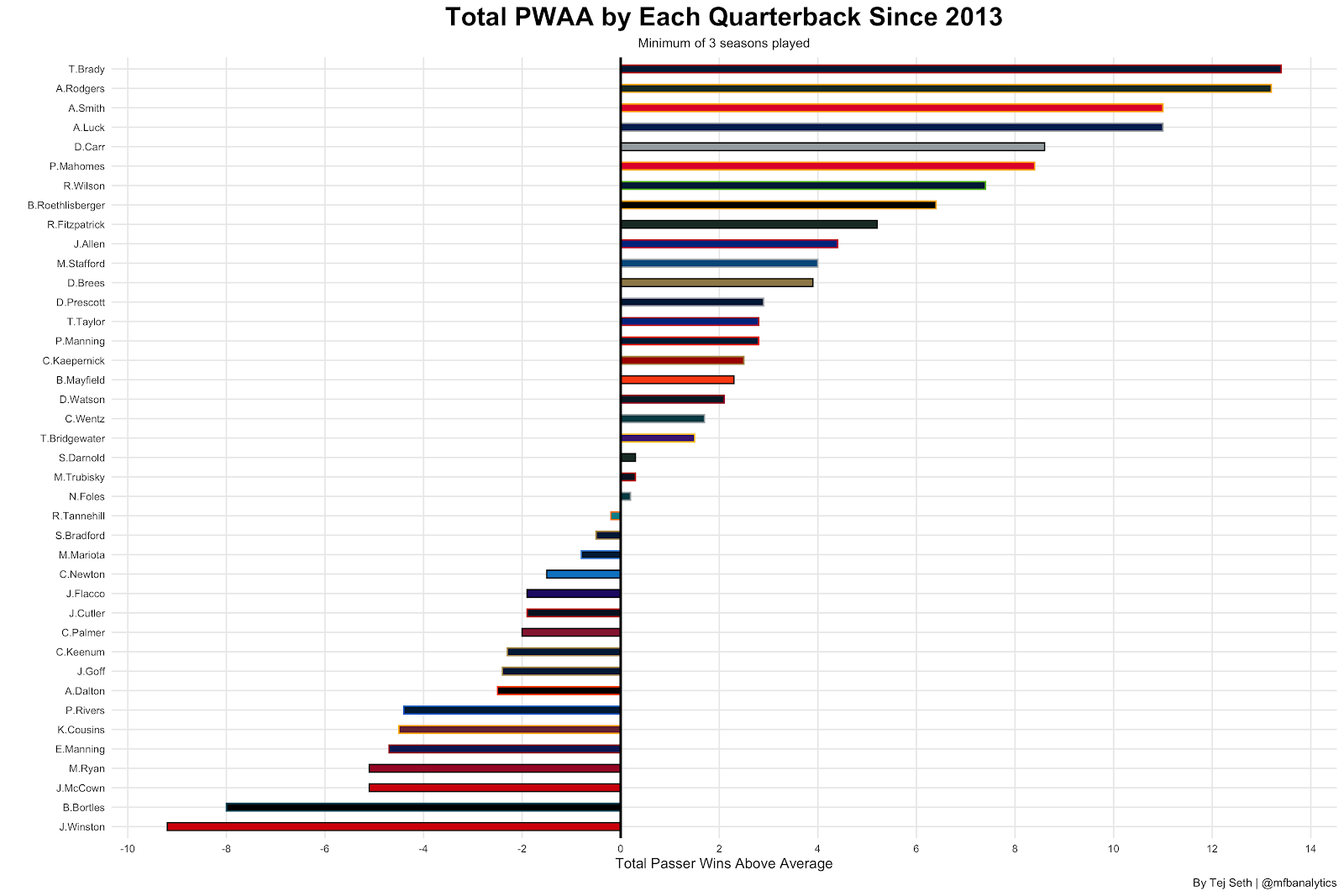 The Buccaneers went from the worst quarterback of the PWAA era in Jameis Winston to the best and it paid off for them this year. There have also been people that have told me that Kirk Cousins is better than Matthew Stafford which can be proved wrong with PWAA as Stafford has been at +4.0 since 2013 and Cousins is at -4.5 in that same timeframe. Also, Patrick Mahomes leads all qualifying quarterbacks with the most average PWAA per year at +2.8 and a total of +8.4 wins in only 3 seasons. Despite that, Mahomes and even Brady don’t have the highest PWAA singular season since 2013. That belongs to none other than Ryan ‘Fitzmagic’ Fitzpatrick: 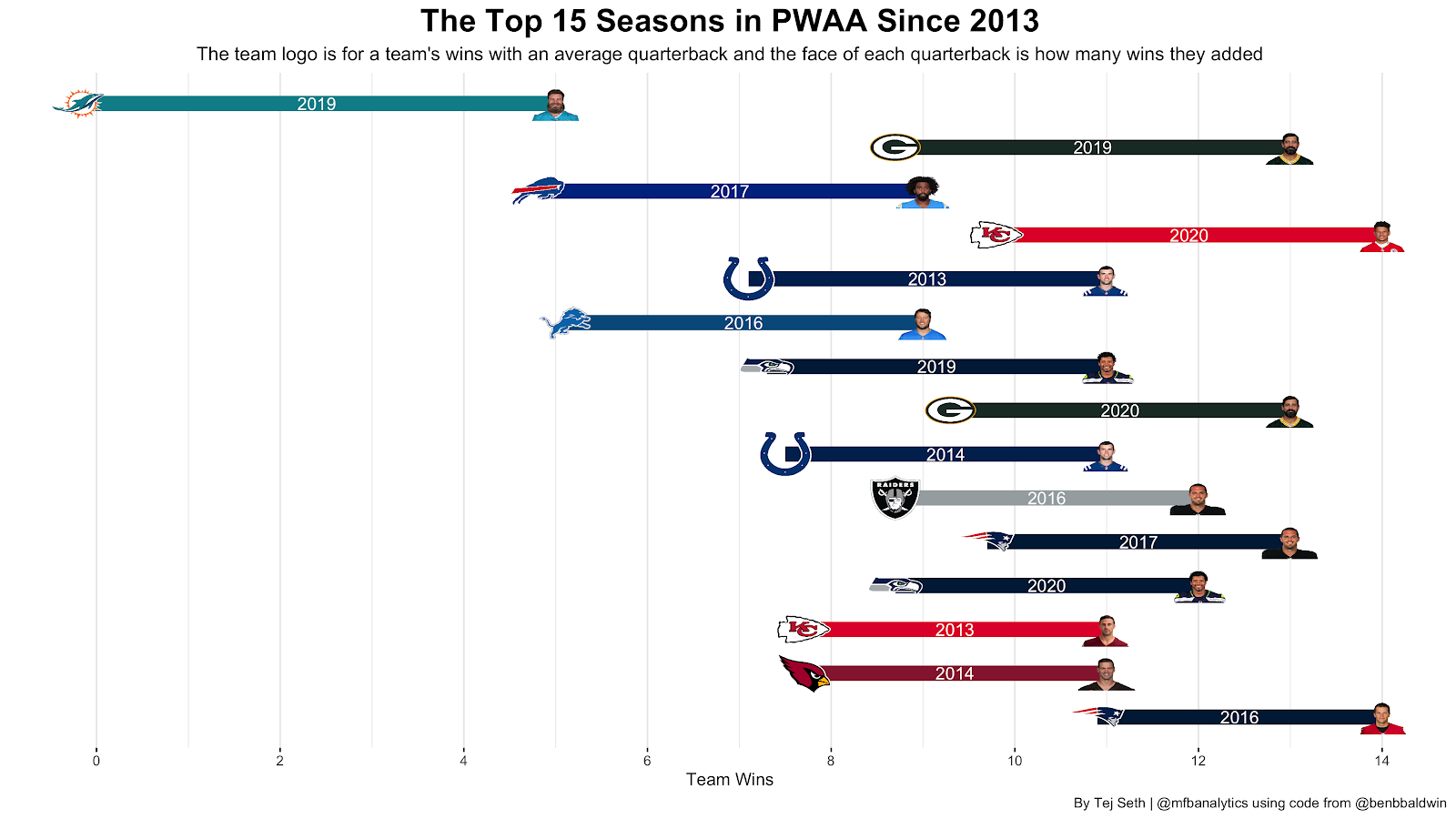 Fitzpatrick was left out to dry on the 2019 Miami Dolphins: They had the worst defense in the NFL, the worst run game, the worst pass blocking from his offensive line and the 5th worst receiving grade. An average quarterback would have gone 0-16 with that team. Fitzpatrick somehow won 5 games…

Thanks to everyone who read and I hope you enjoyed! Be sure to follow my twitter account at @mfbanalytics for more updates on PWAA. Please feel free to DM me or email me at tejseth@umich.edu if you have any questions.

Here is the google sheets my data is on for you to download as a CSV if you want to play around with it: https://docs.google.com/spreadsheets/d/1rCt9ZPRxOEmTXlwwIfxj-1mB8QVHAG8N9cfNnb3Cm3E/edit?usp=sharing

And here is my really messy code that I dumped over from R that includes how I made the model and all the graphs and tables: https://gist.github.com/tejseth/b735af83a5d2e2c5df7936564156a4c7

2 thoughts on “Introducing PWAA: Why Big Ben’s 2020 is Much Better than Tom Brady’s”