This past offseason, 5 NFL teams hired new head coaches to lead their team for this season. Through 8 weeks, only one of these new NFL head coaches has a winning record. However, to see the bigger picture, it is important to look outside the realm of wins and losses for these first year head coaches. Other factors like team culture, improved production in certain areas, and getting the most out of all the talent on the team should be taken into consideration when evaluating these head coaches. Without further ado, let’s get into the rankings.

Ultimately, the Browns have played solid and Stefanski should get credit for how this offense has performed so far. However, the combined record of the Browns opponents they’ve beaten is 11-18-1. They’ve also gotten shutdown by the Ravens and Steelers, both of whom are division rivals. They lost those games by a combined 63 points. It will be exciting to see if the Browns can snap their playoff drought and get healthy again, but Cleveland football is finally back for the time being.

He knows how to build a culture of playing hard every play and it’s shown despite the lack of talent and experience on both sides of the football. Almost every major football site had the Panthers ranked in the bottom 8 of their power rankings before the season started. But, at one point, the Panthers were 3-2 and tied for first place in the NFC South. While they have lost 3 in a row, there is reason for optimism. Let’s start with the offense. On top of hiring Rhule, the Panthers added Joe Brady as their offensive coordinator. Last year, Brady implemented one of the best passing attacks in college football history at LSU. 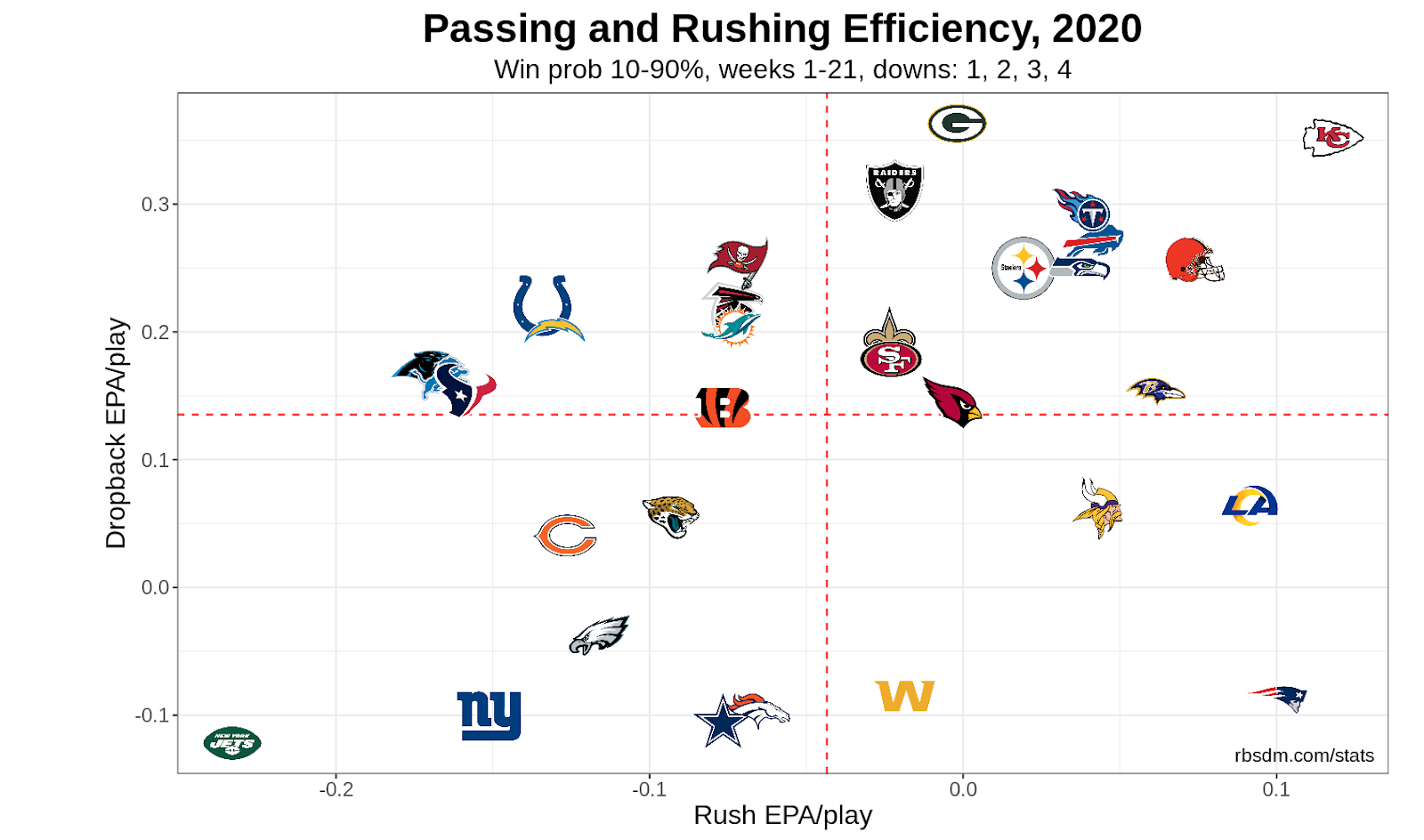 The Panthers are in the bottom-half for EPA/Play on offense ranking 22nd. However, in a shortened offseason, with a new HC and OC, and a new QB, there were going to be some growing pains. Bridgewater doesn’t possess the same type of arm talent that Burrow has either, so the offense needed to be more tailored to Bridgewater’s conservative play style. Per NFL Next Gen Stats, Bridgewater has an average intended air yards of 7 which ranks near the bottom of all eligible passers this year. The offense found a quiet star this past offseason in Robby Anderson as he is added to the list of players that succeed once leaving Adam Gase. Anderson is 3rd in receiving yards at 688, 3rd in yards per route run from the slot, and is 2nd in YAC. He has really transformed from solely being used as an outside burner, to someone who can play inside and run routes underneath and gain YAC. DJ Moore has also had a nice season ranking 7th in receiving yards and 3rd in deep passing yards with 272. The offensive line could use some work as they currently have the 23rd best offensive line unit in the league per PFF. Overall, the offense has been static in some areas, especially the run game (31st in EPA/Rush), but as Joe Brady continues to grow with Bridgewater and CMC finally returning, the offense looks bright for the future. 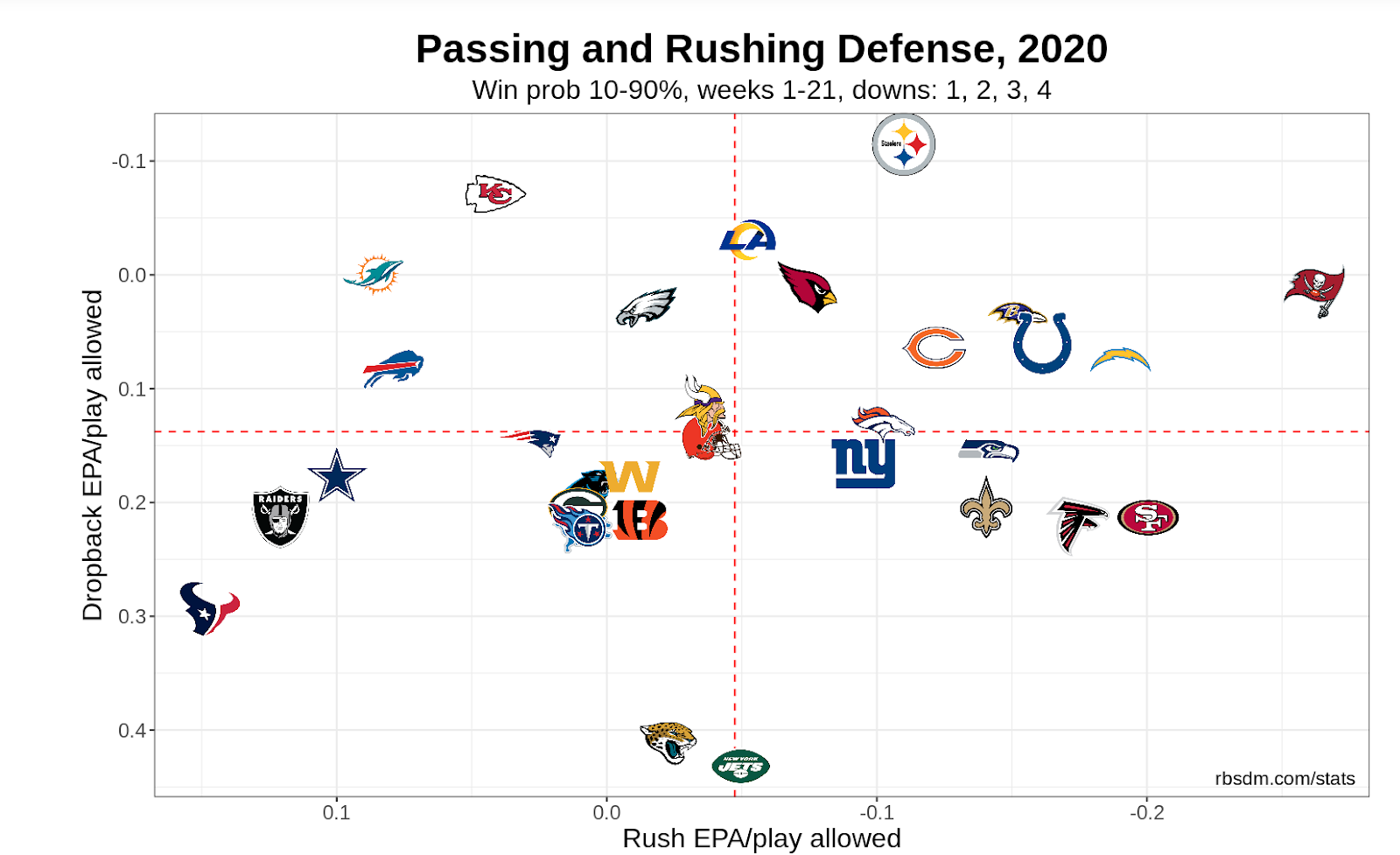 The defense has been below average, but again, this is a very young defense. This past draft, the Panthers used all 7 picks on defense, showing their commitment to that side of the ball. The defense plays hard, scrappy, and mean, and have done well given their lack of talent on that side of the ball. With their best player Kawann Short out for the year, it will be good to see first round pick Derrick Brown’s development as both a run stuffer and pass rusher. There are some positives from this group though especially with last year’s first round pick Brian Burns. He has really improved as a speed edge rusher, racking up 25 pressures so far this year and has amassed a 90.6 pass rushing grade by PFF. He does need to work on his run defense (63.4 PFF rush defense grade), but since he is pretty light for an edge rusher (250 pounds), it’s something that he will get better at with experience. Another important building block is rookie Jeremy Chinn. I remember when all Panthers fans were mad that GM Marty Hurney didn’t select Isaiah Simmons at 7 overall. Simmons was regarded as the ultimate chess piece by draft scouts.

This is Jeremy Chinn’s snaps per position so far this year. As you can see, he is being used almost everywhere on the field. He is everything Isaiah Simmons was supposed to be. Simmons played 83 total defensive snaps this year. Chinn should continue to get better with more playing time and being able to diversify himself to play different positions will only make him a better player in the future.

Rhule might not have a great first year, but the talent surrounding his team is not as good as other teams in his conference. Ultimately, he is up here for his ability to lead and motivate a team to play hard and create a culture that starts with the young players that should reward him with wins in future years.

Overall, Rivera has done what he can with what he has. Looking at their schedule, they are 2-1 in the division, with the sole loss coming to the Giants. How Rivera handles the Haskins situation will be telling for how much control he has on this team and organization, but this season should be about developing that young defense, as well as finding pieces to complement McLaurin and Gibson.

Overall, Judge needs to make sure this team is constantly improving, with an emphasis on the offense and the development of Daniel Jones. It’s hard to evaluate him with how the roster is right now, but there are foundational pieces on both sides that Judge can work with, and should continue to build around in the coming years. He has a shot to win in the weak NFC East if everything goes right and the Giants stay relatively healthy.

The Cowboys last year with Dak were 3rd in EPA/Play. Through the first 5 weeks, the Cowboys were 17th in EPA/Play. Yes, they had the crazy comeback vs Atlanta in week 2, but the offense was stagnant for most of the game. The reason why Dak had so many passing yards was because the Cowboys were down by 3 or more possessions in most of their games so they were always throwing against defenses playing prevent defense. When considering a 10%-90% win probability, the Cowboys fall to the 23rd ranked team in EPA/Play. Simply put, the offense has not been good.

Ultimately, the reason why McCarthy is last is because I believe he has lost the locker room. His staff has been criticized, he has called out his players for not defending Dalton, and he has lost by double digits points in his last 4 losses including getting blown out on Monday Night Football by the Cardinals. I truly believe he will be the only one-and-done coach this year and Mike Nolan will join him. The injuries have hit hard but he really hasn’t gained the respect of the locker room, and the same reasons why Green Bay fired him are why he will be out of Dallas this season.

One thought on “Ranking All First Year Head Coaches so Far”