The offseason is the best time to be a Lions fan. There’s hope. It’s always calming knowing that the Lions are always a year away from being a year away and that first year could always start this offseason. We never know. Bob Quinn, general manager for the Lions, has been criticized by pretty much everyone: national media, local radio, hairdressers and even my grandma. But Bob the Builder has been busy this offseason building a roster that he thinks should be able to go out and compete next year.

Quinn has been busy building the Detroit Patriots. The Lions now have more former Patriots (7) than Lions players still left on the roster since Quinn took over (6). (Since there are more of Bellichick’s players on the roster than anything else Bellichick might as well come over too as it’s only fair). Here are some stats (expect a lot of PFF grades) and other facts about each new player to the Lions plus some thoughts on the Darius Slay trade at the end.

Did Bob Quinn give out a five-year, $45 million contract to someone who has more letters in his name than career starts? Yes, yes he did. But Quinn set it up so the cap hit is $5.4 million next year and about $10.5 million after that. “Big V” is 27 and has learned from Offensive Tackle stars Lane Johnson and Jason Peters. Because of how stacked their line is in Philadelphia, he didn’t get much playing time but was able to play in all 16 games last year for a total of 541 snaps. His overall PFF grade of a 74.4 gave him a 64.6 in pass blocking and a 76.2 in run blocking, which is something the Lions have lacked for years. The money was probably a little much but there were reports other teams were interested in him and Vaitai has only gotten better over time.

Arguably Quinn’s best deal of free agency was signing former Patriots Outside Linebacker Jamie Collins to a three-year, $30 million deal. Jamie Collins was productive last season with 7 sacks, 3 forced fumbles, 81 tackles, 7 pass deflections and 3 interceptions. Jamie Collins’ 55.0 Passer Rating when targeted was 2nd for off-ball linebackers last year. What will matter most for the Lions is whether Jamie Collins is going to play like he did in New England or like he did in Cleveland:

Shoring up the defensive line was priority #1 for Quinn this offseason and these two signings helped. Nick Williams received a PFF grade of 67.7 in 2019 and will provide some much-needed depth on one of the weakest areas of the team. Danny Shelton is another former Brown and Patriot (of course he is) who received a 70 grade with 18 total pressures and 3 sacks in around 500 snaps with New England last year. Before 2019, he was receiving a 75+ every year for three years when it came to run-stopping. For 2 years and only $8 million, this was a good value-deal from Quinn. Getting Shelton for $4 million a year is much better than signing someone like D.J. Reader for over $13 million a year. Quinn might possibly have been reading Joey’s article on why run-stuffing defensive linemen don’t matter too much: https://mfootballanalytics.com/2020/03/19/dont-be-excited-about-your-free-agent-run-stuffing-defensive-lineman/

Does anyone want to guess where Harmon is from? You (probably) guessed it! The Lions traded a 5th for Harmon (ironically the same 5th they received from Seattle for Diggs) and also got a 7th in return. Harmon has a Babe Ruth type legendary story: According to @MikeDanielsPJ, in the Super Bowl when down 21-3, Harmon was riding a stationary bike and apparently yelled out “This is going to be the greatest comeback of all time!” Becoming a Lion will mean he will have to yell that out frequently but hopefully, he has the Midas touch. Harmon is a great cover corner with 2 interceptions, 5 pass deflections, 33.8 passer rating allowed when throw to last year. Harmon lined up as free safety 91.5% of the time last season earning a 92.6 coverage grade by PFF and being 1st in the league among safeties with a forced incompletion rate of 36%. With one year left on his deal and only having to give up a 5th round pick, he should be able to help the Lions tremendously in their three-safety sets.

Me: At 30 years old, Trufant still has some gas left in the tank which is why he is Quinn’s best signing this offseason.

Also me: The Lions were right in trading Slay, he obviously going to slow down now that he’s 30 years old.

Trufant was signed to a two-year, $21 million deal and after dealing with injuries last year was still able to earn a grade of 70.3 with 4 interceptions. Trufant’s 71 forced incompletions ranks 12th in the league since 2013 and is very familiar with man coverage and he has played almost 1,000 total snaps as a man-corner and is rated as the 11th best by PFF. This is one of Quinn’s best signings if he is able to pan out.

Darius Slay had been the cornerstone of Detroit’s defense for the past couple years, including when he single-handily saved Jim Caldwell’s job in 2016 against the Eagles by forcing a fumble and interception that won the Lions the game. He is now traded to the Philadelphia Eagles for a 3rd and 5th round pick. It’s sad but at 30 years-old, Slay’s play has been declining much like a printer running out of ink: 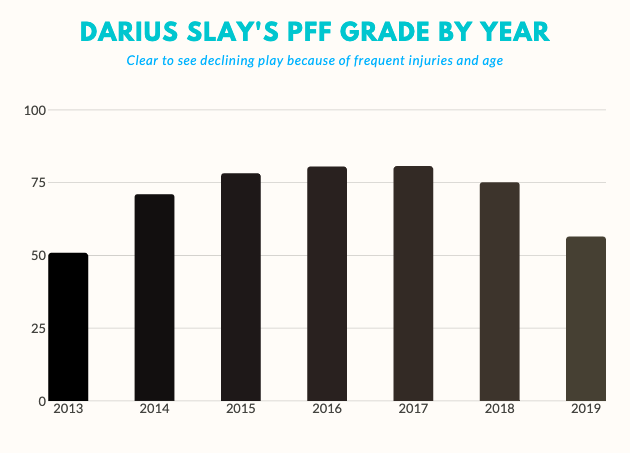 This trade went along with market value as A.J. Bouye got traded for a 4th round pick and Marcus Peters got traded to the Ravens for a backup linebacker and a 5th round pick. The Eagles went along and gave Slay three-years for $50 million which is just something the Lions couldn’t do. The Lions basically had to choose between two options:

I’m choosing option 1 any day of the week.

With Slay being gone it’ll be interesting to see what Quinn does with the extra money he has gotten. Nothing has been too flashy with this free agency but after Quinn overspent on star players and didn’t build up the team’s depth, he seems to have learned his lesson and filled needs this time around. On top of this, the Lions also have five picks in the top 85 of the draft (plus possibly more if they trade back from 3). I used PFF a lot in this article and I understand their grades aren’t perfect but it was the best I had to work with. One more PFF chart and I’m done, I promise. The Lions made a clear effort to improve the most out of any team in their division. The Bears still don’t have a quarterback after trading for Foles (https://mfootballanalytics.com/2020/03/19/ryan-pace-trading-for-nick-foles-over-cam-newton-makes-no-sense/) and the Vikings started with negative cap space and had to shave many players: 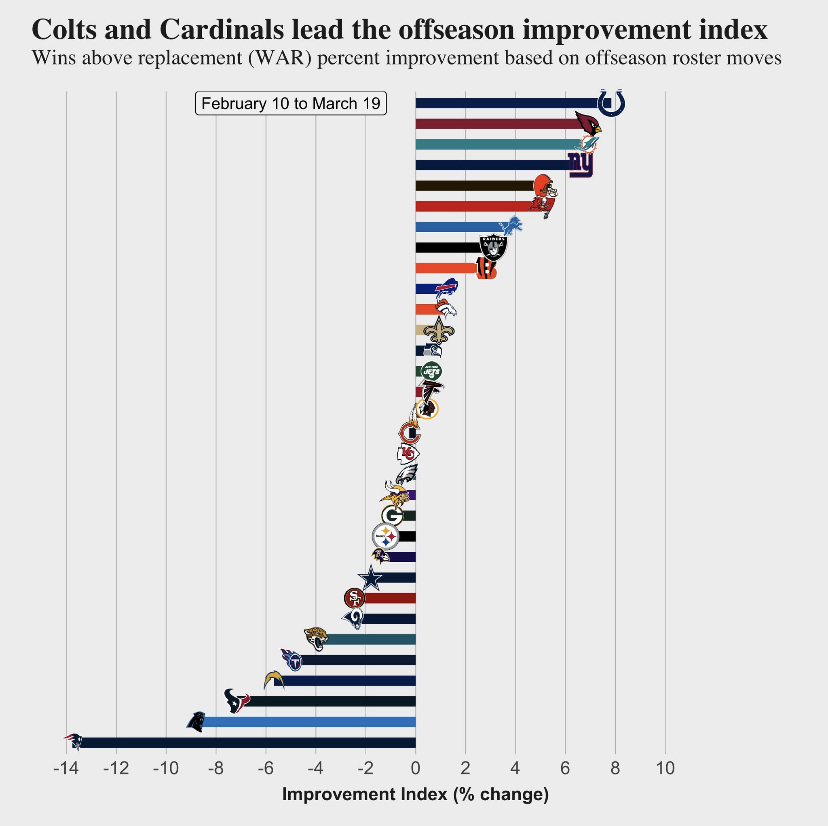 One thought on “The Longest Lions Week Ever”