With the playoffs coming to a close, it’s hard not to peek through the curtain at the next season and begin to strategize for 2023 fantasy football drafts. The running back position is one that will completely change over the course of the offseason with stars like Josh Jacobs and Saquon Barkley potentially heading to free agency and promising rookies like Bijan Robinson and Jamhyr Gibbs entering the flooded landscape once they hear their names called in late April. We’ll be taking a look into a trend with running backs that may help us predict some of 2023’s league winners.

Running back is known to be the position in the NFL with the shortest lifespan. The position is very prone to injuries and production normally falls off around the age of 27 or later. This is why many teams are finding it more advantageous to let their playmakers at the skill position walk after their rookie deal expires rather than granting their players big-money extensions. Potentially in an attempt to counteract this notion, some running backs are beginning to show massive improvements in production in the final year of their contract in order to improve their financial futures. This article will take a look back into 2022 at some of the top running backs that played during the final year of their rookie deal in order to reason for their increased output.

It was a very enjoyable season for the many Saquon truthers that promised a healthy and productive season for the 5th-year running back out of Penn State. Although he didn’t produce at the unreal, RB1 rate of his rookie season, Saquon very much outperformed his RB11 consensus ranking in PPR leagues, finishing as the RB 5 (RB6 in STD). The story of the season for Saquon was his ability to stay healthy. He played in all 16 games of the fantasy season, sitting out only for week 18 against the Eagles to rest. Thanks to a much needed recovery during the offseason, Saquon was able to average 17.75 PPR points per game, a number he hadn’t been anywhere close to since his first two seasons where he averaged 24.11 (2018) and 18.78 (2019).

“Don’t pick me up in fantasy no more; I really don’t care.” These are the words that will haunt the many fantasy managers that followed Miles Sanders’ advice during their drafting process. Sanders set the bar very low and jumped about a hundred feet over it as he finished the season as the RB15 (RB10 in STD), far ahead of his consensus rank of RB33 in PPR leagues. Sanders’ production in the season’s top rushing offense was in large part due to his touchdown scoring, nearly doubling his previous high of 6 (2019 and 2020) with 11, all coming on the ground.

Pollard is the running back that made the largest jump in terms of ADP (Average Draft Position). In what was once Zeke’s backfield, Pollard established himself as the ‘RB1B’ to Elliott’s ‘RB1A’, matching Elliott’s 248 touches with 232 of his own. Pollard also capitalized in the touchdown department, more than doubling his previous season high of 5 (2020) with 12. Most importantly, Pollard became the primary receiving back, nearly doubling Elliott’s 23 receptions with 55.

Sadly, not every running back could benefit from the trend illustrated by the previous 4 players. Montgomery and Singletary share a similar story: Both running backs entered this season fresh off of a more than serviceable third year. Sadly, each back fell nearly 20 PPR points short of their prior season. To add insult to injury, Montgomery did so having played 3 extra games. However, in spite of their overall losses in points on the season, both players improved their points per touch from the year prior (Montgomery improving from 0.74 to 0.76 and Singletary improving from 0.78 to 0.81).

The following chart shows the year-to-year trend in each player’s PPR fantasy total. 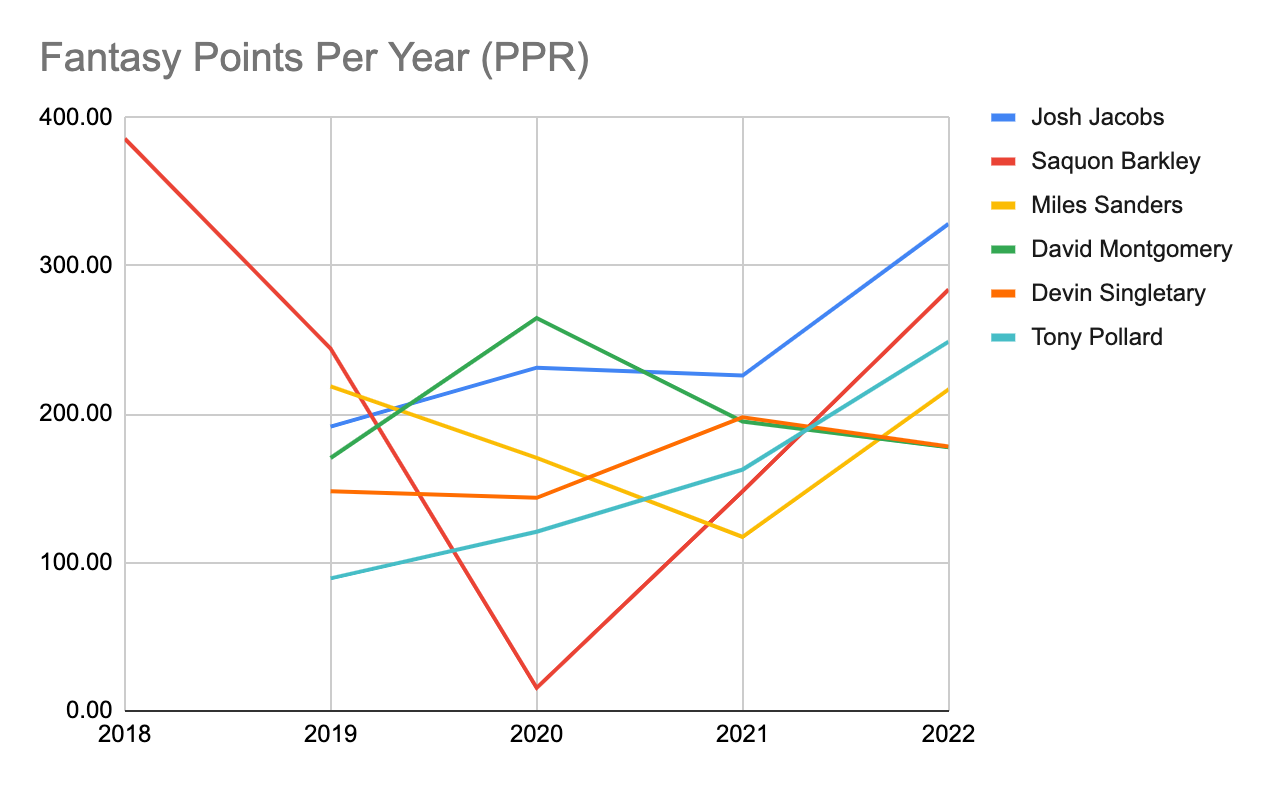 Of course the massive downward spike for Saquon Barkley is due to his 2020 week 2 ACL tear, sidelining him for the rest of that season. However, for Jacobs, Barkley, Sanders, and Pollard, there is a visible upward trend in the final year of their contracts, 2022. I originally predicted that this trend was due to an increase in efficiency, but as the following chart illustrates, this is simply not the case. 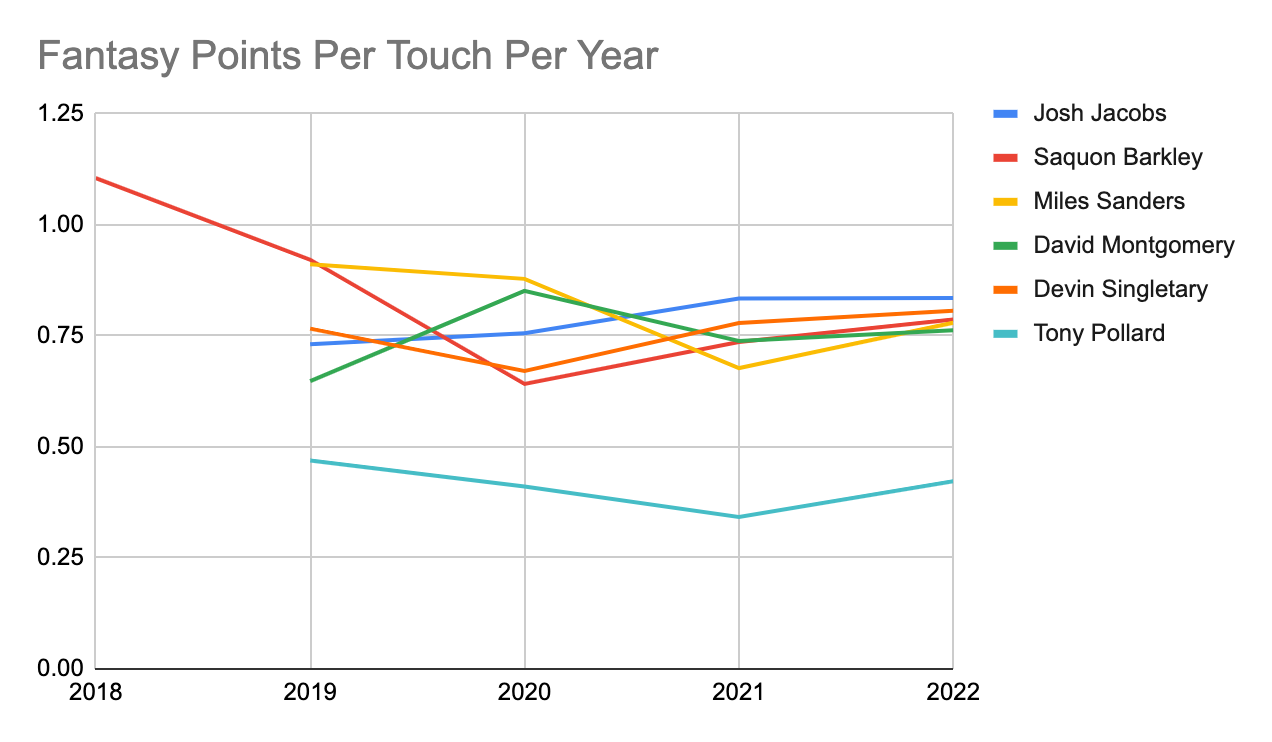 Although some players do see shifts in their touches from year to year, no shifts are nearly great enough to compensate for the change in overall production. 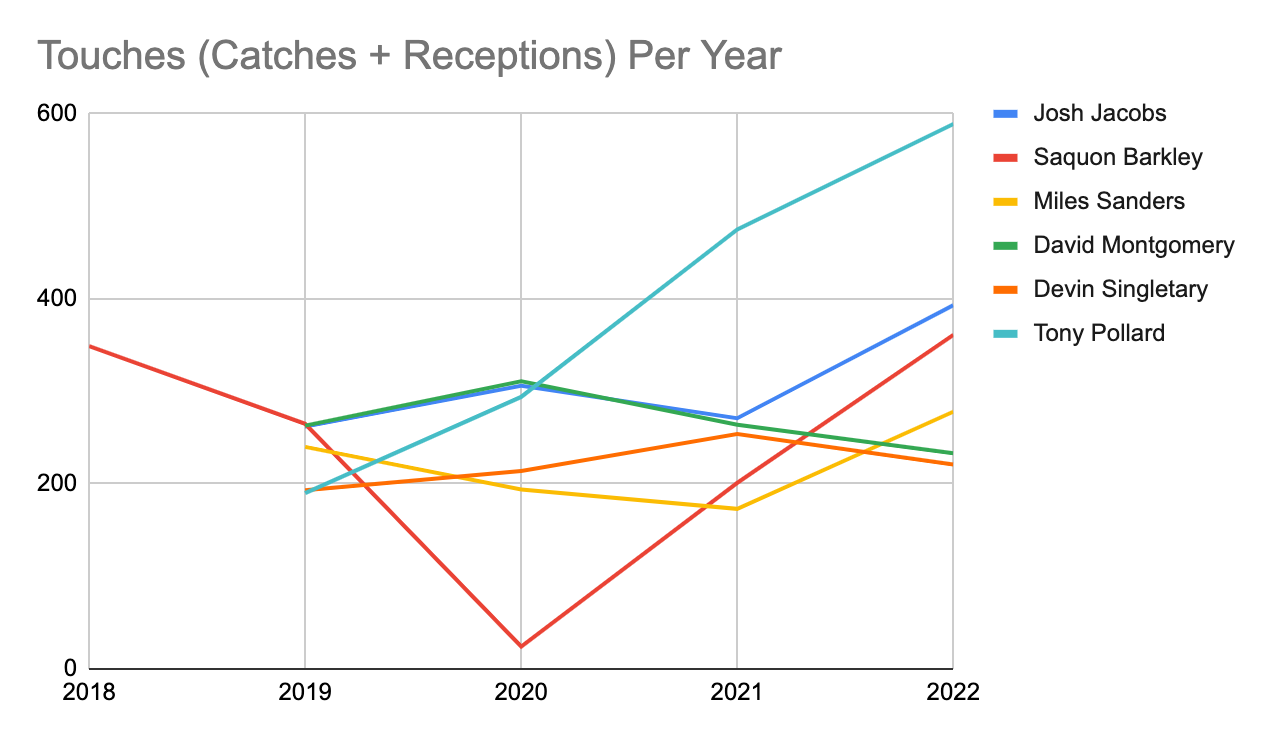 As can be seen in the chart above, I concluded that touches were responsible for the increase in production. Correlating with the fantasy points per season graph, Jacobs, Barkley, Sanders, and Pollard all see similar increases while Montgomery and Singletary fall.

So why is it that Jacobs, Barkley, Sanders, and Pollard see such large increases in touches in their final tenured seasons? My best hypothesis is that teams are not afraid to use these running backs (potentially risking injury), knowing they won’t bear the burden of an injured player past that season. Teams also want to see what they’ve got in their players before making the decision of whether or not to resign them.

Why did some players not see a similar increase in touches?

On the other side of the spectrum, Montgomery and Singletary saw decreases in their touches. It’s plausible to believe their teams have simply moved on from them, opting to rather give touches to their younger running backs with more potential. In Montgomery’s case, this is second-year back Khalil Herbert and in Singletary’s case, this is rookie James Cook. Even if the veteran back may be more efficient or better at the time, teams would rather experiment with pieces that will still be a part of their future past that season.

What does this mean for 2023 fantasy?

Top running backs entering the final year of their contracts in 2023 include Jonathan Taylor, D’Andre Swift, Cam Akers, J.K. Dobbins, and AJ Dillon. Although I’d like to say all 5 of these players will follow the same trend as Jacobs and Barkley, this most likely won’t be the case. Therefore, it’s important to monitor running back transactions via free agency and the draft as we move into the 2023 season.

What does this mean for running backs in the future?

This is one of the first years that we’ve seen such a large number of top players operating at such a high level in the final season of their rookie deal (or potentially 5th-year option). Looking back at the top four running backs from the stunning 2017 rookie class (excluding Leonard Fournette due to his own peculiar contract situation), Christian McCaffrey, Dalvin Cook, Joe Mixon, and Alvin Kamara all received massive 4-5 year contracts after their third season of play. It seems as if general managers would rather ride out their young running backs on cheap rookie contracts for 4 years and move on rather than pay up for a potentially injury-ridden and less productive extension. This is a potentially devastating trend for talented backs looking to secure their financial futures.