Yesterday, the Seahawks sent Wilson and a fourth rounder to the Broncos in exchange for QB Drew Lock, DL Shelby Harris, TE Noah Fant, and a bundle of draft picks. In this article, we will be looking at the potential fantasy impacts of this blockbuster trade using fantasy win percentage statistics from the 2021 season For reference, fantasy win percentage is the average chance a player gives you to win a fantasy game in a 2 RB, 2 WR, 2 FLEX, TE, QB, D/ST fantasy league.

Wilson’s move to Denver reignites our faith in Denver’s arsenal of receivers. Last year, Wilson’s average fantasy win percentage (48.3%) stands high above both Denver QBs in 2021 (Teddy Bridgewater at 38.3% and Drew Lock at 11.1%). This swing in QB performance could potentially open up the floodgates for the Broncos’ receiving core after their 2021 struggles. 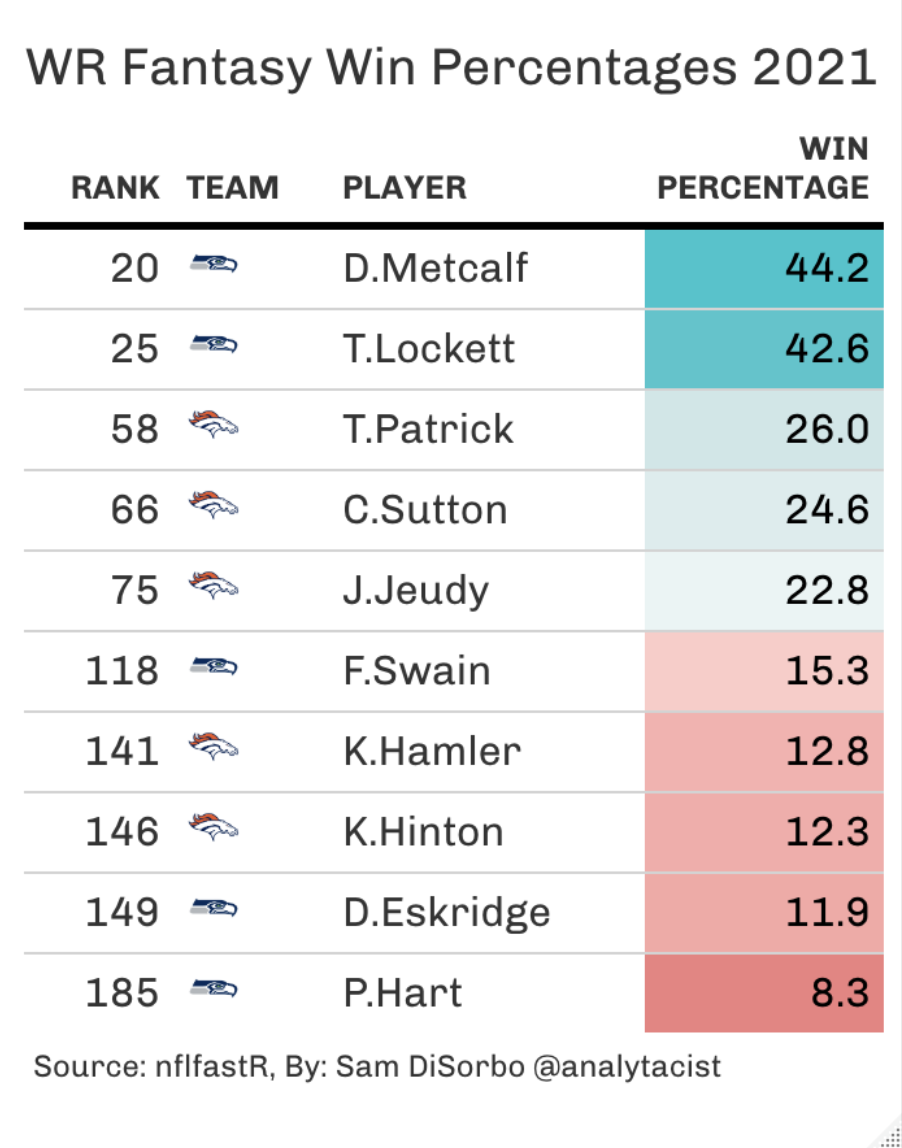 Looking at last year’s WR fantasy win percentage rankings, it is possible we could see some movement following the 2022 season. While we can’t be sure it is the QB play that stunted Patrick, Sutton, and Jeudy’s production last season and boosted Metcalf and Lockett’s, we can assume Wilson’s presence in Denver will increase the output of the receiving core. On the flip side, Metcalf and Lockett might be WRs to avoid in your upcoming fantasy drafts. If the Seahawks proceed to keep Lock as their starter, it is unlikely that he will generate strong fantasy performances from his receivers with a similarly talented corps from where he came. 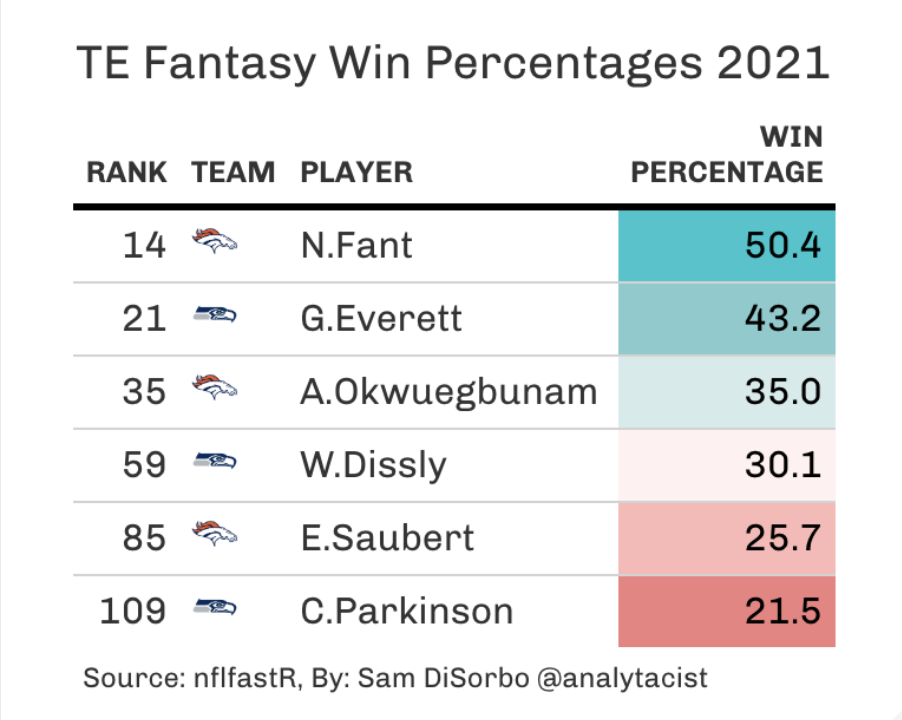 The TE situation is a bit different. The Lock/Bridgewater duo was able to catapult Fant to 14th in TE fantasy win percentage last season, and as Fant moves to Seattle with Lock, it opens up the possibility for him to repeat this success. If Everett is moved during free agency and Fant wins the TE1 spot over Dissly, he could be a late-round TE grab in fantasy drafts. 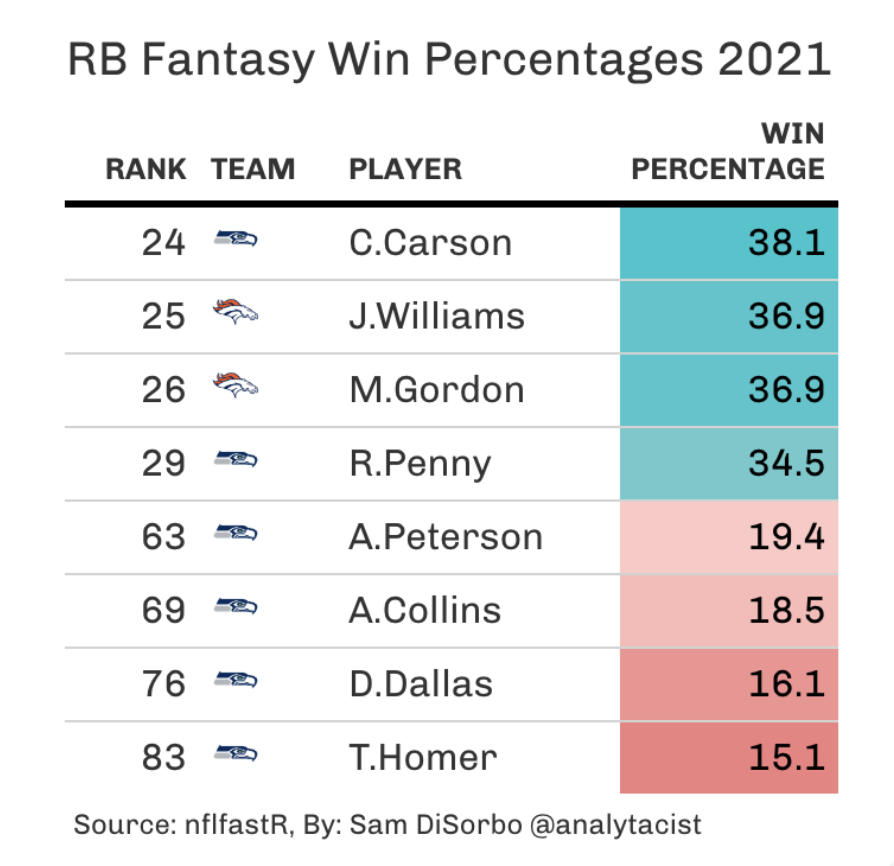 The biggest aspect we have to look at with the situation is what the Broncos next move with Melvin Gordon will be. If they pawn him off before the start of the season, there is major upside for Javonte Williams, who boasted an average fantasy win percentage of 37% in a split backfield. If he receives RB1 touches next season with Russell Wilson at the helm, we could see a serious increase in production from the second-year back. As for the Seahawks, Chris Carson has little upside. Last year he ran a split backfield with Rashad Penny and did not put up great fantasy win percentage numbers, ranking 24th amongst RBs. Barring injury and assuming his workload persists into 2022, I don’t see his production getting any better with Drew Lock under center.

Below are my key fantasy takeaways following the trade: