Narrator: Are you tired of your NFL team performing poorly year-after-year and not playing any meaningful games in December?

Narrator: Would you like to adopt players throughout the year that will provide you with the most joy?

*The filter switches to color*

Narrator: That is why you need to buy the patented NFL FUN factor! FUN stands for Fun Unprecedented Novelties as these are football players who contribute the most excitement to the sport! It can make Sunday’s fun again!

Narrator: Use in small doses only. Doctors recommend consulting the FUN factor once a week to pick the most exciting players. More than that could lead to an overstimulation for a fan who usually doesn’t have much fun watching football.

As a Lions fan, my team’s season is often over within 8 games into the year and it feels like watching an infomercial over and over. Since the Lions have started 1-3 and have a 10% chance of making the playoffs according to FiveThirtyEight, I’ve felt my excitement for each game plateau. That is why I have chosen to develop the FUN Factor. I wanted to look into each easily measurable position on the offense (Quarterback, Pass Catcher and Rusher) and see which players are the most fun to watch. That way, on Sunday instead of watching Matt Patricia blow another lead, I could watch Patrick Mahomes sling it 50 yards down the field to Tyreek Hill or Derrick Henry to stiff arm someone into the Earth’s core.

First I started with the quarterbacks. I used three advanced statistics for that position:

Taking in passes with a 75th percentile or better Air EPA and CPOE as well as scrambles in that same category, I present the FUN Factor for quarterbacks since 2015:

On the x-axis we have the sheer amount of fun plays since 2015 and the y-axis has the fun rate of each player. So while Brady has the 4th most fun plays, he also passed just as much as anyone in recent years and was very average as a fun player overall. By far the most fun player was Lamar Jackson who had a 13% fun rate since entering the league. This means for every 8 dropbacks, chances are Lamar made one of them fun with a great pass or a scramble.

Second was Jameis who was just as much YOLO as he was FUN. With Brees being very below average on the fun play rate scale, you’d have to think Jameis could make that offense fun again because right now I’d rather wait at the DMV for 4 hours than watch Brees throw checkdowns. Wilson has led the league in the most fun plays since 2015 with a total of 391 and 20% of those coming from scrambling. Because of that, he is my adopted QB for the rest of the year (I may or may not be saying that because I have him in fantasy). When taking a glance at fun plays and fun play rate for 2020 we can see some interesting candidates emerge: 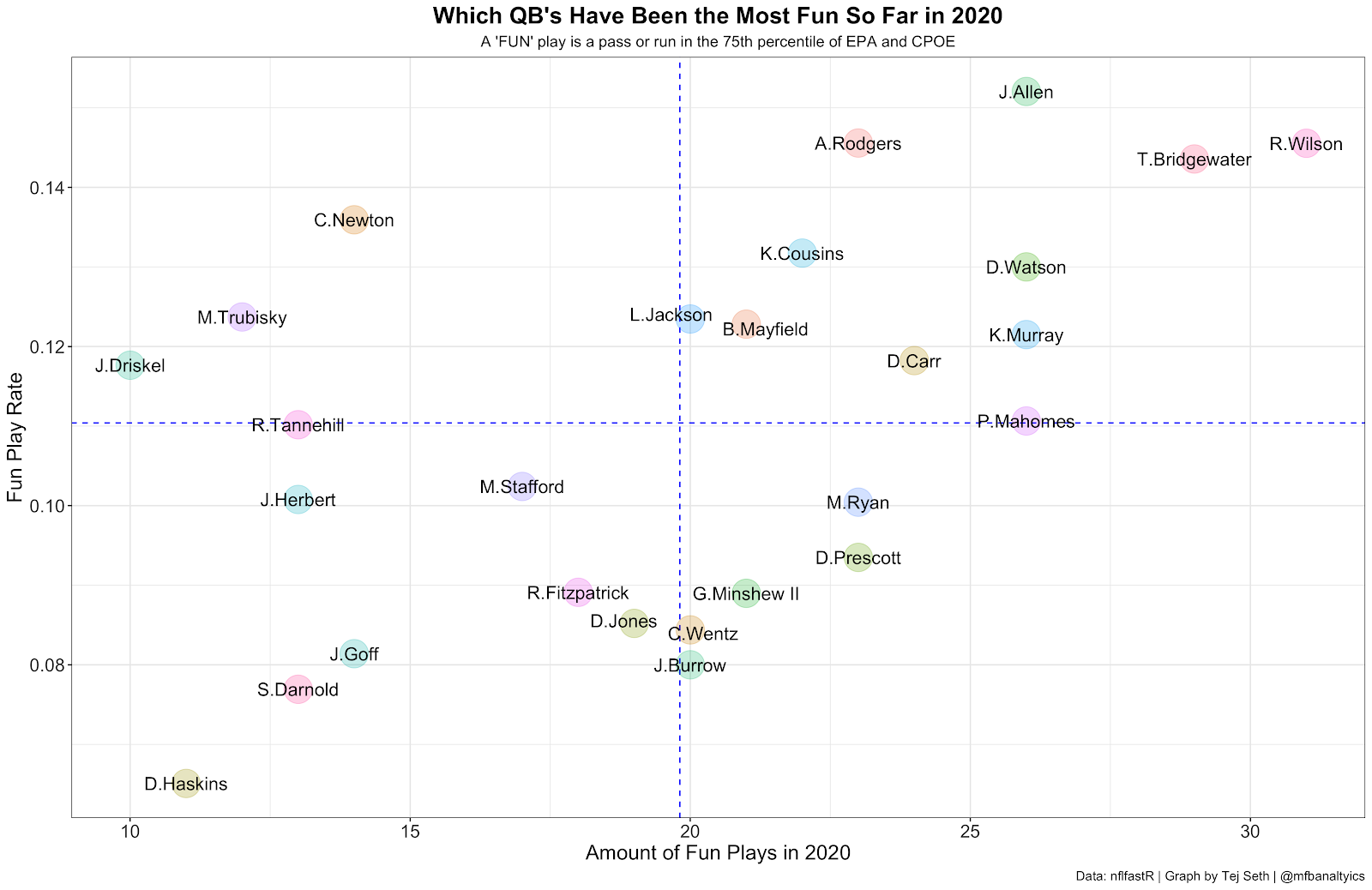 Teddy Bridgewater has had the 2nd most amount of fun plays so far this year! I think we can all agree Wilson, Bridgewater, Rodgers and Allen are the 4 best QB’s in the NFL right now. Mahomes had the 10th highest fun rate out of 50 qualifying quarterbacks since 2015 but this year he has been average in regards to that. Lamar has also regressed while we can see why Haskins got benched as he barely had a double digit amount of fun plays the whole year.

Moving on to pass catchers, I used both Air EPA and Yards After Catch EPA (YAC EPA) to determine fun plays. A fun Air EPA play was a play over 1.37 points added and a fun YAC EPA play was more than 0.53 points added. Since 2015, this is how players have stacked up with fun plays through the air and fun plays after the catch: 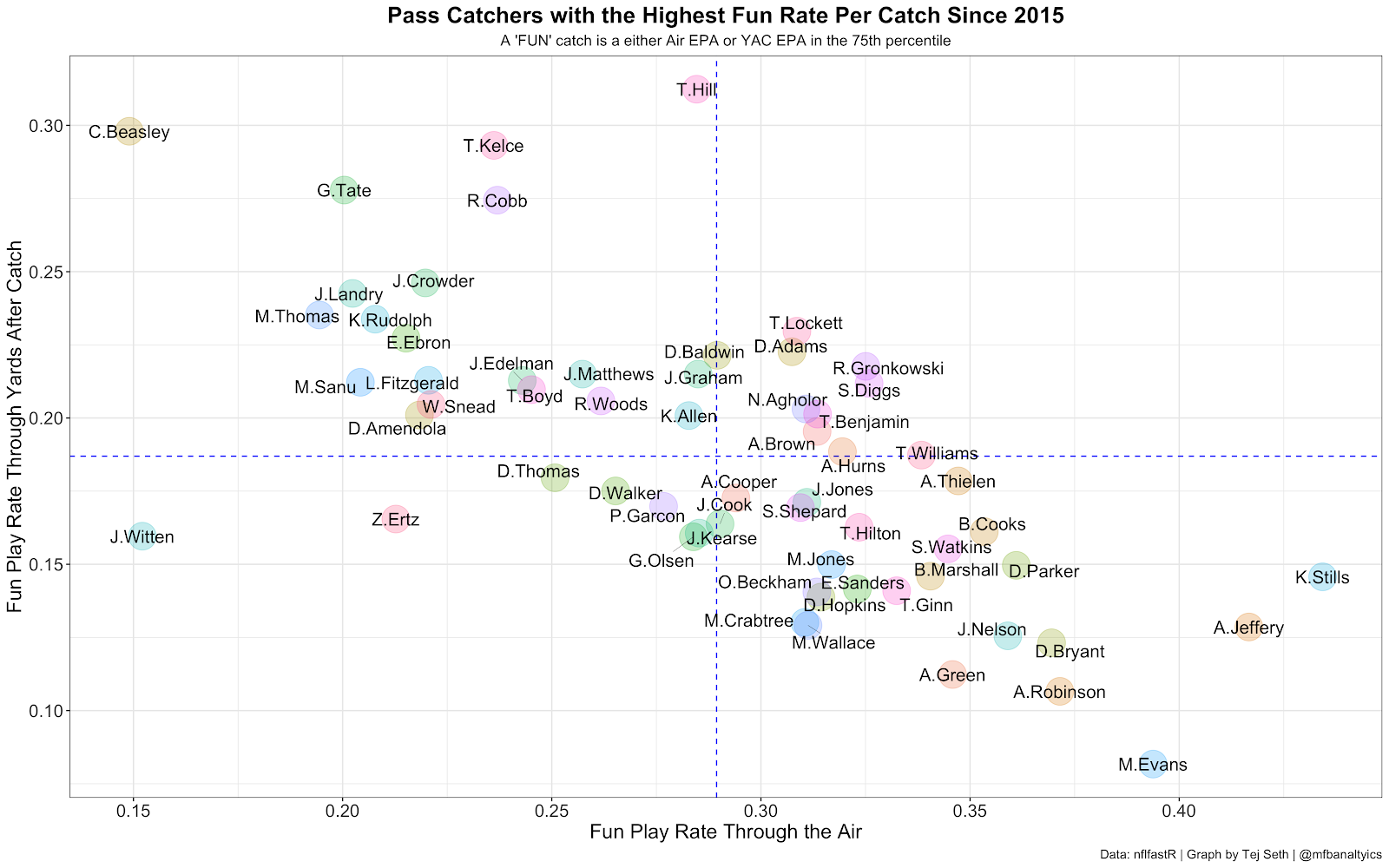 The self-proclaimed YAC king is right where he should be as Golden Tate has turned 27.5% of his catches into fun plays after the catch. Tyreek Hill and Travis Kelce are just as scary in this graph as they are on the field as they have been YAC Gods with fun play rates around 30%. To me, the elite players are the ones in the top right who are both above average through the air and after the catch. The list includes Tyler Lockett, Davante Adams, Rob Gronkowski and Stefon Diggs; all have been a pleasure to watch. It also turns out when Agholor is able to actually hold onto the football, it can make it pretty fun! (Eagles Fan Throws Shade at Agholor). Mike Evans and Allen Robinson have been beasts throughout the air as they still remain some of the best to do it. When just looking at 2020, we start to see some breakout stars emerge:

With the amount of fun plays through the air on the x-axis and amount of fun YAC plays on the y-axis, Ridley immediately jumps out as the bright spot for the 0-5 Atlanta Falcons. No one has come close to the amount of explosive plays throughout the air in 2020. As for the y-axis, the top two running backs in the NFL in Alvin Kamara and *whoever plays RB in Carolina* have both had over 15 fun plays through yards after the catch. The elite fun WR’s of this year have been Hopkins, Anderson, Brown, Moore, Hill, Robinson and Metcalf as all of them have shown they can be fun through the air and once they have the ball in their hands.

Considering a multitude of research has been done by the analytics community on why running backs don’t matter, I considered leaving them. But then as I listened to the dorm room next to mine clap and cheer during “The Bachelorette”, I realized that something that doesn’t matter can also be fun. Because of that, I have decided to include running backs but not on an EPA basis since they don’t control that. What running backs do control are yards after contact and broken tackles. Based on the results since 2017, we can see unexpected players emerge as some of the NFL’s most run rushers to watch:

The elite rushers in the NFL in the top right as Alvin Kamara has a crazy broken tackle rate and Josh Jacobs has a good broken tackle rate with a high yards after contact. The leaders in yards after contact are Gus Edwards and Benny Snell Jr., who almost no one regards as the best backs in football but they sure are a lot of fun. The least fun running backs are Devonta Freeman, Latavius Murray, Kenyan Drake (let’s blame his problems on Adam Gase) and Melvin Gordon. We can take a closer look at those running backs when looking at 2020:

To close this off, my FUN MVP ballot is listed below with two slots for each position. These are the players the numbers tell me I should be most excited to watch for the rest of the year:

*assuming McCaffrey comes back from injury and takes away carries from the best running back in the league AKA Mike Davis.