Welcome to a new series of articles from the University of Michigan Football Analytics Society where members of the club will pick their favorite NFL spread of the week and use analytics to back up their argument. The authors of this article were given two rules:

Expected Points Added (EPA): The one play change in expected points from each yardline based on down and distance that measures the “impact” of a single play. The average EPA per play for an offense is 0.06 which is a good baseline to keep to keep in mind during this article.

Reasoning: Seattle is 3-0 and coming up wins where they have put up 38, 35 and 38 points with an offensive EPA/play of 0.22 that is currently 4th in the NFL. A good reason for that is because of the Seahawks adaptation of #LetRussCook. As seen in the chart below, they have gone from being last in early down pass rate in 2018 to now being 2nd and just behind the Chiefs: 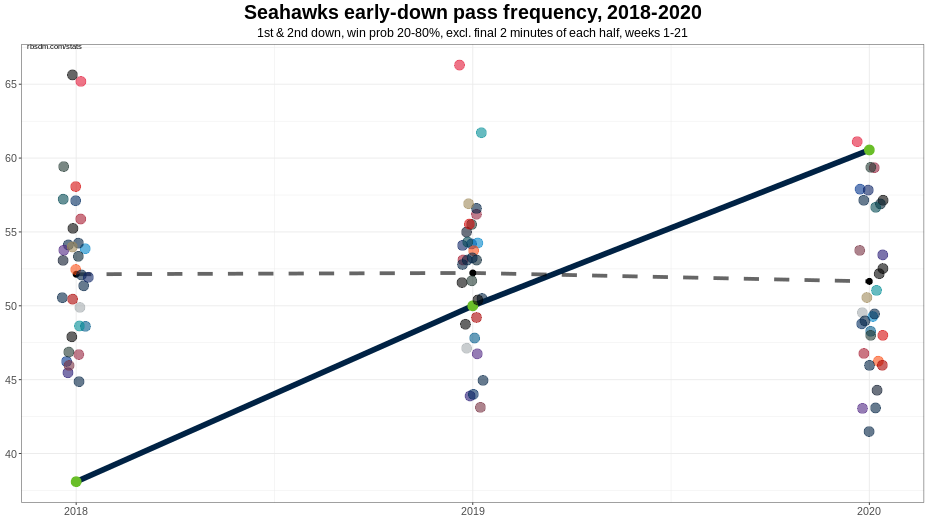 It turns out when you let PFF’s 2nd best player make plays more often, it makes your offense better. The Dolphins can hold their own on offense as their offensive EPA/play of 0.13 ranks 13th in the NFL. However, while the Seahawks defense ranks 15th for defensive EPA/play, the Dolphins defense ranks 31st. Even though the game is all the way on the east coast in the Miami heat (no pun intended), the Seahawks should be able to win by more than a touchdown since they’re passing at high levels against a bad defense and were 3-0 when traveling cross-country last year.

Reasoning: Josh Allen and the 3-0 Bills are one of the hottest teams in football, and boast the most efficient offense in the NFL with a non-garbage time EPA/play of .332. Allen has added accuracy to his strong arm with a league-leading EPA per dropback of 0.497, meaning he essentially contributes an estimated .5 points to the score every single time he drops back to throw. The Bills are an impressive team beyond Allen as well. They rank 10th in total DVOA, and 8th in defensive EPA/play, presenting themselves as legitimate contenders in the early stages of the 2020 seasons.

Their opponent, the Las Vegas Raiders, claim a deceptive 2-1 record, with wins over the Carolina Panthers and the sputtering New Orleans Saints, who hold a combined record of 2-4. The Raiders are 9th in offensive EPA/play and 24th in defensive EPA/play, respectively. Though their offense appears threatening, they are missing both of their starting outside receivers in Bryan Edwards and Henry Ruggs III.

While my analytical side is hesitant to make such assumptions, the Bills to cover is what I would consider “free money”, and I’m confident that if you make this bet you will see many more “bills” in your bank account this weekend.

Don’t forget, though, the points are what determine the spread. Despite Los Angeles’s high efficiency (434.7/game), they are only ranked 20th in offensive grades by PFF compared to Tampa Bay ranking 9th partly because of their inability to score points. Tampa Bay scores 27.3 points/game while Los Angeles only scores 17.3 points/game, so Tampa Bay seems to be doing more with less yards. This could indicate that they are taking early leads, which is a fantastic indicator of winning by a large margin.

“Why shouldn’t Los Angeles cover the 7 points?” you may ask. Because this is by far the best defense that Herbert has faced since he earned the starting job in week 2. Having faced Kansas City (ranked 27th in defense according to PFF) and Carolina (ranked 31st in defense according to PFF), Los Angeles only scored 18 points/game against those teams (with each at home). Tampa Bay’s defense will only make it harder to score, especially on the road. While Tampa Bay’s offense hasn’t ranked particularly great in offensive EPA/play, they still rank 6 spots higher in EPA/play. Where Tampa Bay has separated themselves from the rest of the NFL has been on defense in the first three weeks of the season: 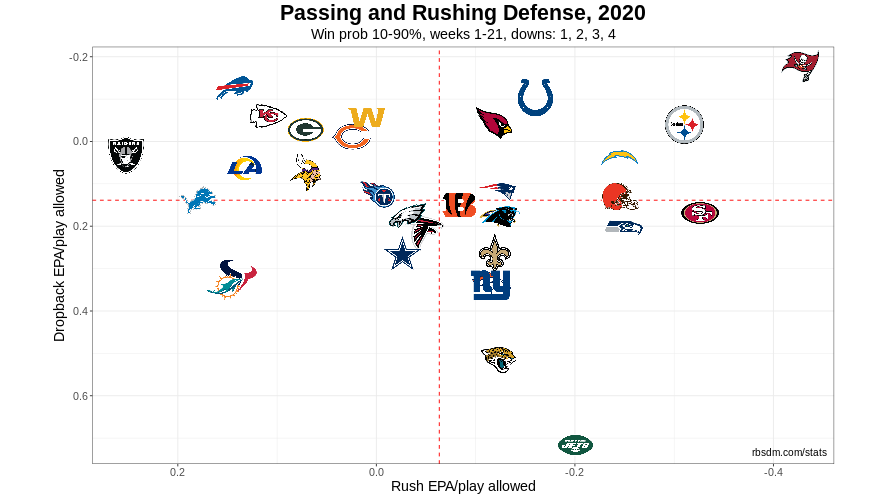 Tampa should be able to hold the Chargers to under 20 points and I believe they will win 24-13, covering the spread of 7.

Reasoning: While Cleveland is 1-2 and Dallas is 2-1, there is a reason why the ‘Boys are favored by 5 points in this week 4 showdown. After getting trounced 38-6 in Baltimore against the Ravens in week 1 (and suffering -25 points against the spread), the Browns two wins have come against the Cincinnati Bengals and the Washington Football Team. While the Browns generally looked impressive in these victories, we mustn’t overlook the fact that Cleveland was at home in both games against the Bengals and Football Team are both bottom 7 teams in terms of offensive EPA/play. The Browns took advantage of their leads in these games by being able to close them out by giving a whopping 67 carries combined to the duo of Nick Chubb and Kareem Hunt and a 12th ranked rush EPA of -0.038. Baker hasn’t shown he can succeed without a strong run game as he currently has the 24th ranked dropback success rate and this game does not favor a heavy run script as evident by a 56 point over-under (Vegas projects a 31-25 victory for the Cowboys).

On the other side of this matchup, the Cowboys have had the misfortune of playing two the NFL’s top teams in the Los Angeles Rams and Seattle Seahawks, yet have almost covered the spread in both games. Dallas is currently 10th in success rate while the Browns have been below league average in both rush and pass EPA per play allowed since the start of 2019. You can’t be a below-average defense when going on the road to face a Dak Prescott-led offense. When we combine the statistical differences with the fact that Cleveland could be missing both Denzel Ward and Greedy Williams, the Dallas passing game is about to explode. These offenses simply are incomparable and Dallas’s defense has allowed a 42.5% success rate compared to Cleveland’s 44.6%. The Browns are simply outmatched in all aspects as they travel to Dallas, and it’s much easier to trust Dak than Baker. Give me America’s Team to cover all day long!