I have spent my last week in a cave trying to develop a model that can predict how quarterbacks will play in 2020. In 500 years, when archaeologists are looking at caves for drawings, they will see lots of numbers scribbled everywhere and my best attempts to draw the faces of Russell Wilson, Drew Brees, Patrick Mahomes and Lamar Jackson. I have now left the cave, received a computer, taught myself R and developed a model that tries to predict quarterback performances for 2020:

In the rest of this article, I will explain how I arrived at these conclusions and do some analysis on each tier. Essentially I created a new variable where I weighted certain advanced statistics. First off, I had to look at different advanced statistics to determine which ones have the best correlation with next year’s performance. Doing some research on my own and checking my results with Ben Baldwin’s (@benbbaldwin) list, I found that the stats listed below are strongly correlated with a quarterback’s performance the next year: 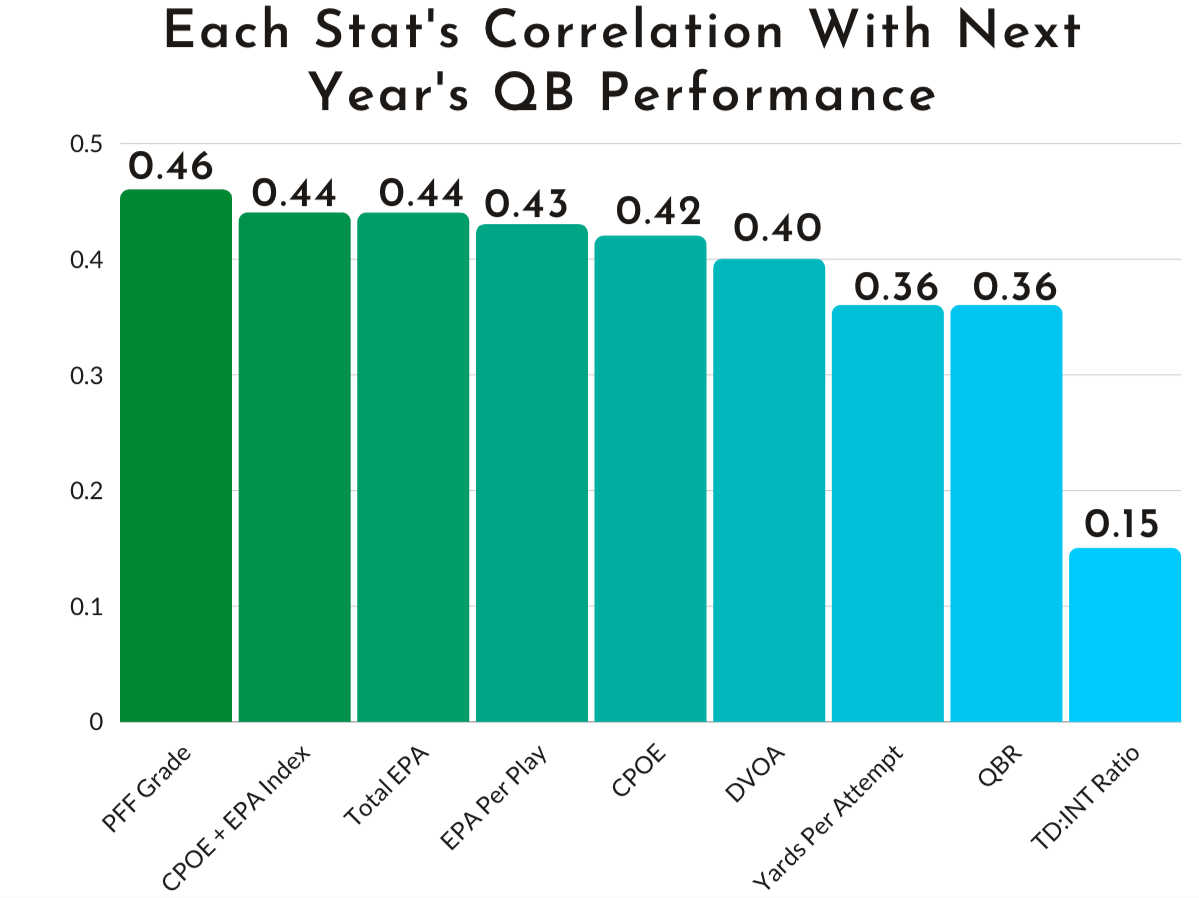 I found that Pro Football Focus’ (PFF) grade was the best at predicting how a quarterback’s EPA per play would be the next year. The next best predictor was CPOE + EPA Index as that takes into account both a quarterbacks’ completion percentage over expectation (CPOE) and their expected points added (EPA). DVOA, done by Football Outsiders, and QBR, done by ESPN, were also pretty good predictors too as they were much better than traditional statistics like touchdown-to-interception ratio.

I put all of these stats into my model and weighted them based on whether they had a better or worse correlation with next year’s performance. My model and the variables I used were strictly based off of last year’s performance. I then used The Athletic’s 2020 Quarterback Tiers in which they asked 50 coaches and executives to compare it to my analytical model. Since I had a minimum of 100 dropbacks in 2019, quarterbacks like Cam Newton, Ben Roethlisberger and rookie QB’s aren’t included. Here were the results: 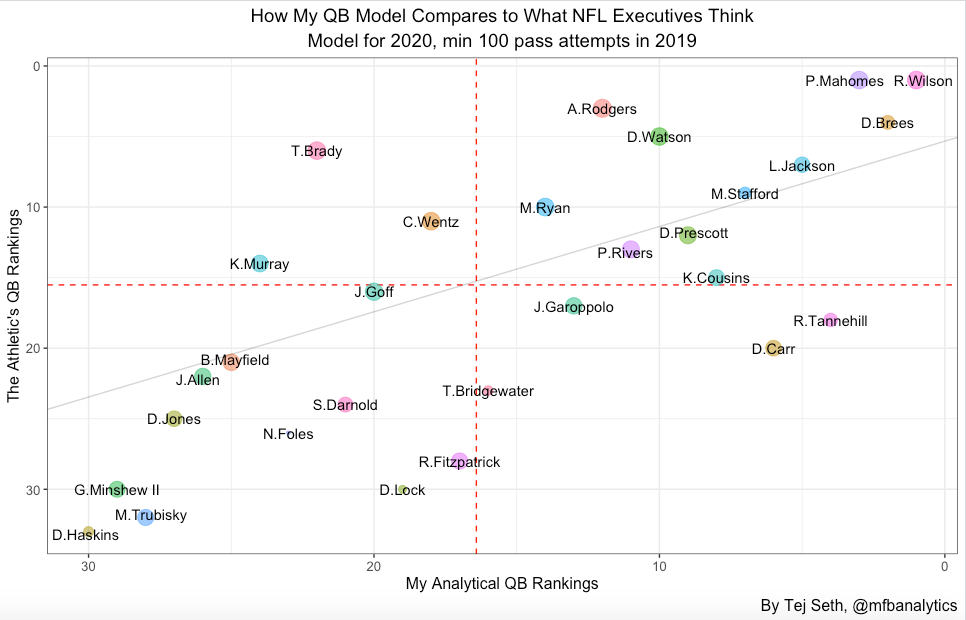 In the top left are QB’s that I have as below-average but NFL executives have as above-average in Murray, Brady and Wentz. In the bottom right are the QB’s that I have as above-average but NFL executives don’t like as much with Garoppolo, Carr and Tannehill. I then made a composite score of my analytics what NFL executives think. I did this because there’s things executives know that my analytics don’t account for like how good of a leader a QB is or things like Carr and Garoppolo checking down so often are helped by their supporting cast.

Since PFF grade and the EPA + CPOE composite were the best predictors or next year’s performance, here is a graph that shows which QB’s performed the best in both of those areas:

I rescaled my model to be out of 10 and Russell Wilson scored the highest with a perfect score. Mahomes, Brees and Jackson are close behind Wilson:

Although Wilson and Brees’ EPA per play isn’t as high as Mahomes or Jackson’s, they make up for it with a high CPOE and a great grade from PFF. If you were to ask most people which QB in the NFL they’d sign to a one year contract, it would probably be one of these four (unless you’re asking Ryan Pace).

Tier 2 is owned by the NFC North along with Deshaun Watson in his first year without Hopkins, Ryan Tannehill in a revamped offense and Dak Prescott in what may or may not be a contract-year for him:

My model has Stafford has the best QB in the NFC North followed by Cousins and then Rodgers but NFL executives still think Rogers is the best QB in the NFC North. As a Lions fan, I promise I didn’t fudge the numbers to make Stafford the highest. I think a lot of the perception around Cousins comes from his inability to perform well in big games or against bad defenses as seen below, he is much worse than average against top-half defenses: 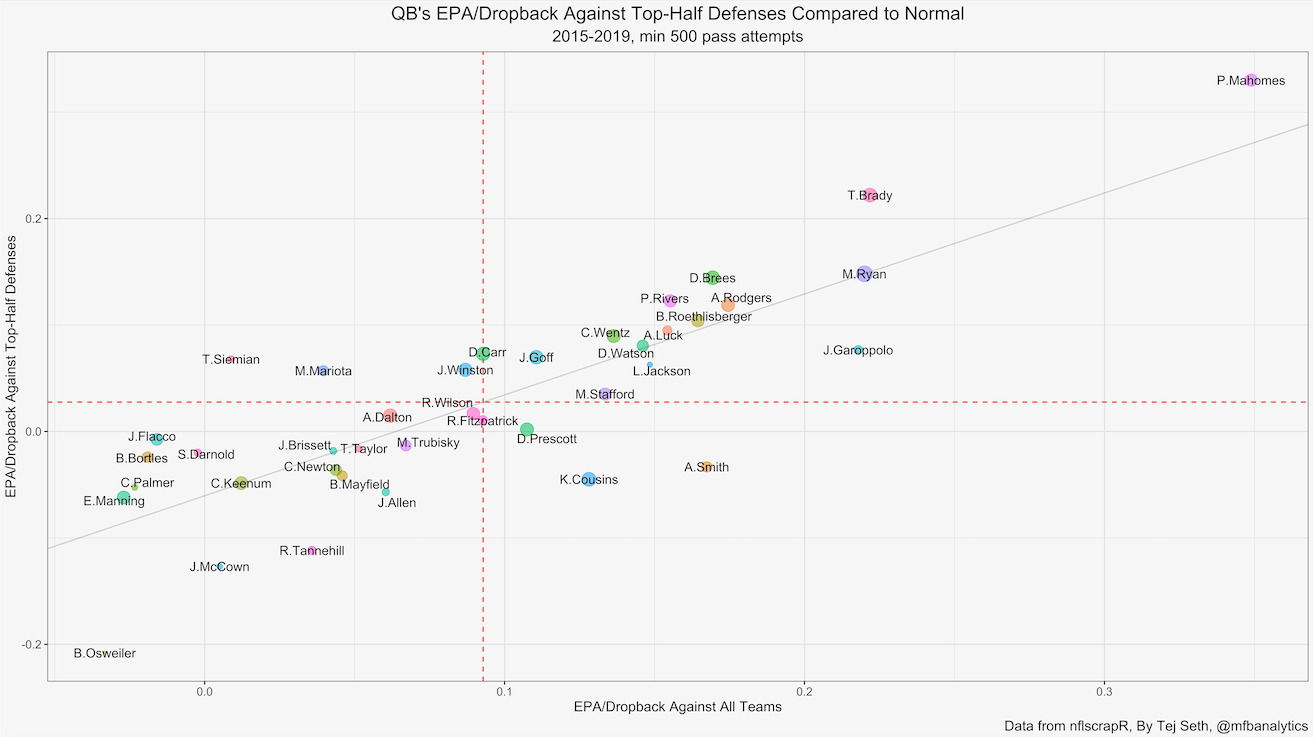 If Dak lives up to what I have him projected as, that would mean another year of him playing like a top-10 QB and a large contract from either the Cowboys or another team. Also, Tannehill took advantage of his greatness last season by actually signing a contract extension and all eyes will be on him this year to see if he can sustain a similar level of play. Analysts have labeled him and the Titans as regressions candidates for this year but my model is still much higher on him than the executives are.

Tier 3 happens to have a group of quarterbacks that I want to see more of before making my final decision on them (Carr, Garoppolo and Wentz) and also has quarterbacks I’ve seen far too much of (Rivers and Brady):

Carr has developed a reputation for not taking risks as his yards per attempt is so low but his QBR and CPOE were the highest in the group. Brady being in tier 3 of anything just seems wrong but considering he had an EPA per play of 0.06 last year and a negative CPOE, it’s tough to see him ever reaching elite status again. The Colts are my pick for their division because they are getting with Rivers as the 13th highest projected QB and he’s joining what is already a talented roster. This might be the year the Dak vs. Wentz debate comes to an end as they are both really good QB’s but Dak is projected to be in another tier right now. Even when considering the lack of weapons at the Eagles, Wentz still has a negative CPOE and small DVOA which brought him lower than Dak in my rankings.

Other than the ageless Ryan Fitzpatrick, there are a lot of unknowns in this group. Goff, Darnold and Mayfield need to have good years this year or else their teams could be looking elsewhere soon:

Bridgewater and Lock barely made the sample size constraint which means they will have a lot of variance this year but last year they showed they can add a pretty high EPA per play with 0.09 and 0.14 respectively. Since Bridgewater’s yards per attempt are so low, it’ll be interesting to see McCaffrey become a fantasy football machine in PPR leagues with Bridgewater’s checkdowns. Darnold is the only one in this tier to produce a negative EPA but he makes up for it with the highest CPOE and an average PFF grade. My model doesn’t account for the jump a rookie can take from his first year to his second so that’s why the executives are higher on Kyler Murray than I am. However, Pavel Vab (@Pavel_Vab) did find that rookie year CPOE is predictive of a player’s career CPOE: 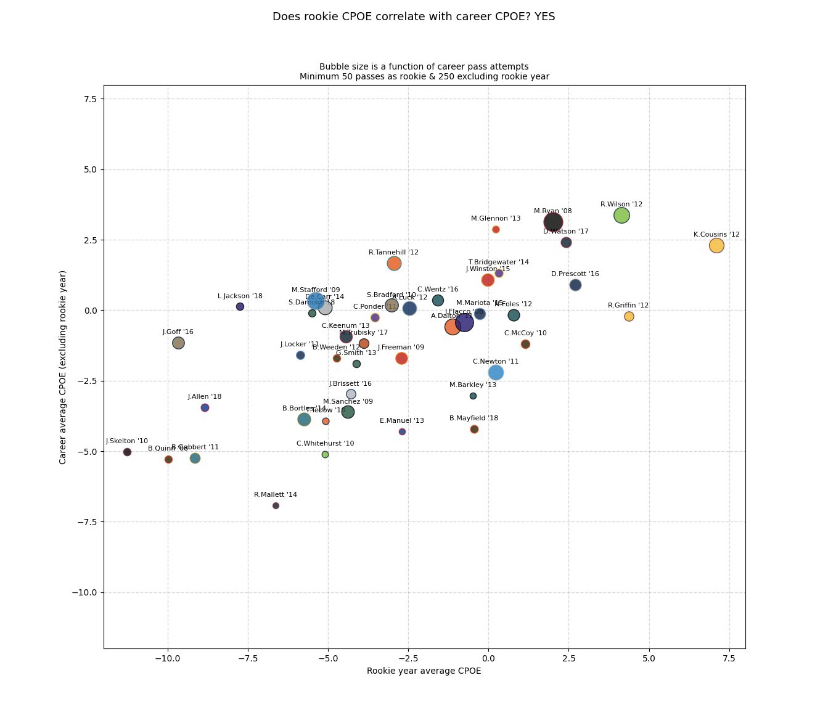 Because Kyler’s CPOE was -1.2% last year, it might be predictive of what his career in the NFL would look like

If you need time to laugh at the fact the Bears have to choose between two quarterbacks in the lowest tier, please feel free to put down the device you’re reading this on and laugh until you can’t anymore. A lot of this tier includes unproven QB’s that might need more time like Jones, Minshew and Haskins. The Bills as a surprise Super Bowl pick has never made sense to me as I have Josh Allen projected very low and the NFL executives ranked him as the 22nd best QB.

Those are my projected QB rankings for the 2020 NFL season that will certainly not blow up in my face at all.