It must be very difficult right now to be a Raiders fan. 2 weeks ago they took the reigning Super Bowl champs down to the final minute where they were upended by the brilliance of Patrick Mahomes and Andy Reid. 20.3 million people tuned in to watch Derek Carr go toe-to-toe against the MVP frontrunner in Mahomes. Although they lost, the Raiders looked legit and even Travis Kelce acknowledged it. Then week 12 came around and the wheels fell off. Going on the road against the lowly 3-7 Falcons, the Raiders fell flat on their face and got blown out 43-7. This is deja vu for the Raiders. At this same time last year in week 12, the Raiders went on the road to play the Jets and got blown out 34-3. Lets see how similar those losses were from last year to this year and how it could possibly impact the Raiders playoff hopes.

Those two losses are alike in many ways. Raiders fans should be worried that this season could end up being a repeat of how last year finished. Losing to the Jets began a 4 game losing streak which prevented the Raiders from making the playoffs. They even lost their final game in Oakland to the Jaguars who were 4-9 at the time.

So far this year the Raiders have been much better, especially since they have been the only team to knock off the Chiefs. They have also had impressive victories against the Saints as well as the Panthers early on in the season.

To further see how similar these 2 losses from week 12 were from last year to this year, let’s dive into the analytics between the games.

As you can see, in both 2019 and 2020, there was a huge drop off in the offensive play from weeks 1-11 to week 12. Derek Carr’s EPA + CPOE composite score dropped by about 0.14 points this year and around 0.15 last year. In both years, he had a top 9 EPA/Play total and a top 7 CPOE score going into week 12, but suffered when going on the road that week. The offensive EPA/play in both 2019 and 2020 was the 27th ranked offensive out of 28 qualifying teams, and this year was even worse than last year. The Raiders would have had the NFL’s worst offense of week 12 if it wasn’t for the Broncos starting a practice squad Wide Receiver at Quarterback because of COVID implications.

With the fall of Derek Carr in week 12 of 2019, the entire offense suffered as well. 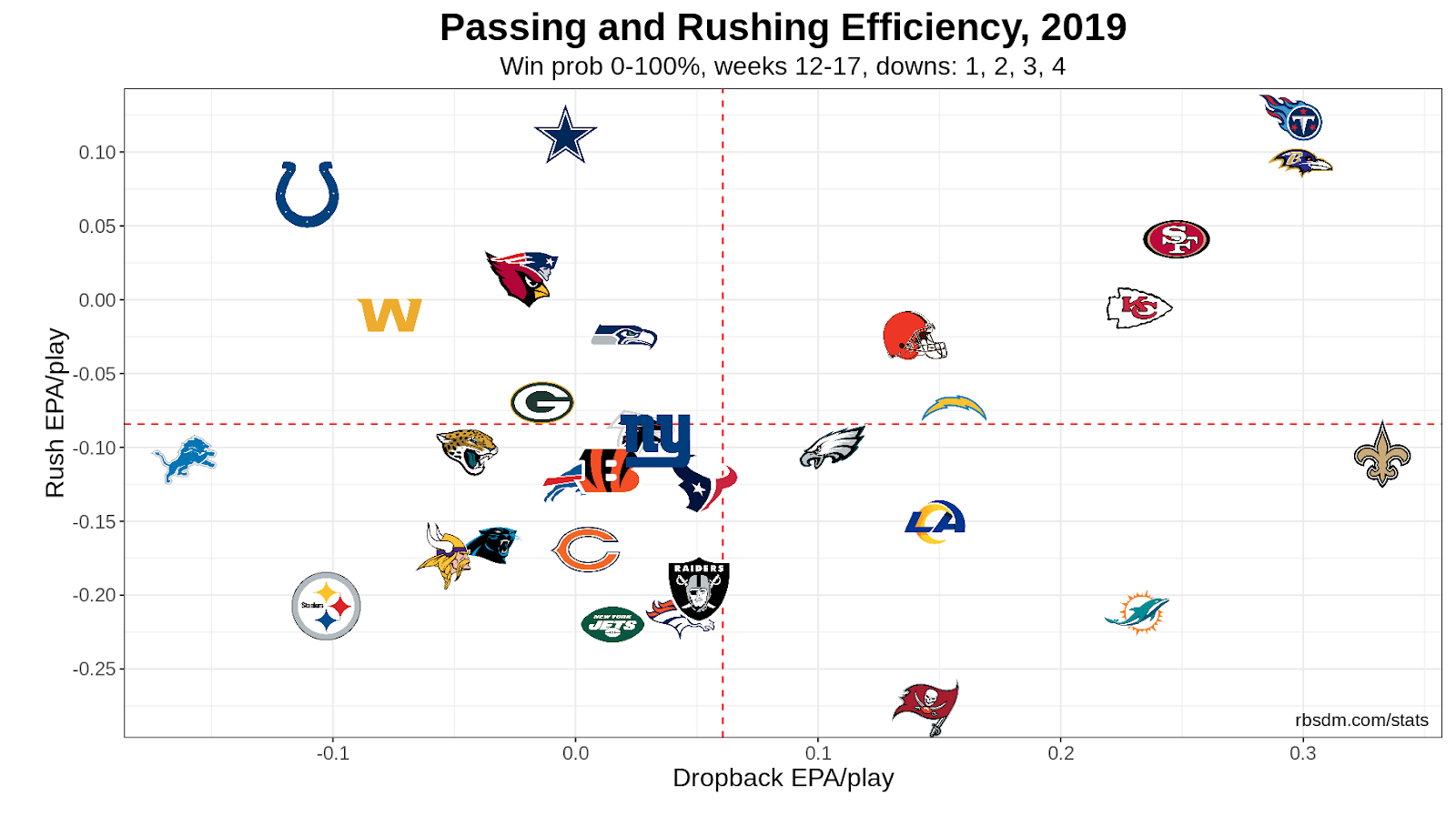 This is how the Raiders ended the season last year. From weeks 12-17, they had the 22nd best EPA/Play on offense. What hurt them was their inability to finish drives in the red zone. From weeks 12-17 last year, the Raiders only scored 6 TD’s on 16 red zone drives which was a 37.5% clip (31st). So far this year, they have been converting their red zone trips to TD’s at a 59.5% rate which is pretty good, but that pace needs to continue for them to have a shot at the playoffs.

Let’s move onto the Raiders defense. This unit has been abysmal ever since Khalil Mack got traded in 2018, and there have been no positive signs that the unit would be able to turn it around under DC Paul Guenther (last in EPA/Play since 2018). Last year the defense was awful.

The defense ended the year allowing a terrible 0.118 EPA/play. They just never seemed to put it all together and it was a very disappointing showing from their defense last year. They ended the year with the worst EPA/dropback allowed and their highest graded player per PFF was Michigan’s very own Maurice Hurst who had a mediocre 73.1 grade. Despite all of their FA signings and getting players like Johnathan Abram and Hurst back, the Raiders have been terrible on defense so far this year.

I thought GM Mike Mayock did a pretty good job this offseason in making draft choices and FA signings to address the biggest needs on the defensive side of the ball. He shelled out a significant contract to Cory Littleton (3 years $30.25 million) who was coming off one of his best seasons with the Rams. However, Littleton has been a liability this season.

Littleton seems to have taken a huge step backward. I think it may be attributed to Littleton being forced to play in a 4-3 scheme rather than the 3-4 scheme he was in with the Rams. This type of play is not what Raiders fans were expecting from their star FA signing. On the flip side, the other LB they signed in free agency, Nick Kwiatkowski, has had a great year and been one of their best defenders. Sporting a 90.4 coverage grade, he has been everything that the Raiders have wanted. In 3 less games, Kwiatkowski has more defensive stops, more PBU’s, a lower passer rating allowed, and more pressures in less pass rushing snaps than Littleton does. 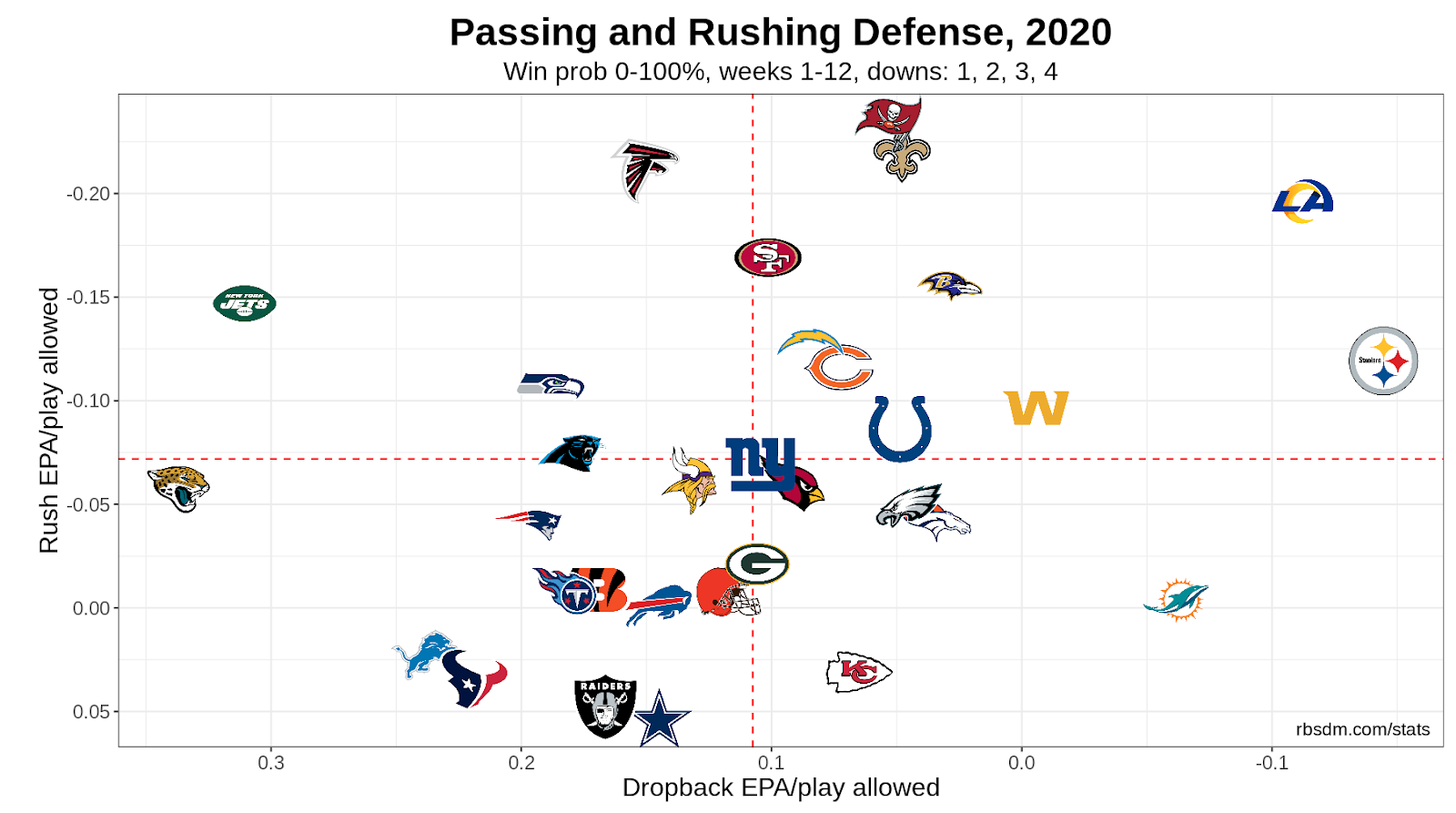 They have the 28th worst EPA/Play allowed on defense so far this year. Their EPA/Play allowed through week 12 is 0.124 which is actually higher than this time last year. After this year, it may be time for Mayock and Gruden to pull the plug on Paul Guenther and look to hire a new DC. With all the moves and signings the Raiders have made to help that defense, they should not be a bottom 10 defense. Ultimately, the success of this defense will come down to the development of their young guns that they’ve drafted in the last 2 years. In the secondary, Abram, Trayvon Mullen, and Damon Arnette will all play together for at least 2 more years. Abram has proven to be a human bulldozer, but is one of the worst coverage safeties you will see this year as seen by his 38.1 coverage grade. (Just look at this clip powered by Next Gen Stats and follow Abram #24). Even though Mahomes has 2 guys in front of him, Abram runs from his zone straight to Mahomes and Kelce runs straight to where Abram was for the game-winning TD.

Outside of their secondary, their defensive line needs to continue taking steps forward. Second year edge rushers Clelin Ferrell and Maxx Crosby have played well in stretches, but both players are complete opposites. Crosby has produced more while rushing the passer (6 sacks), but Clelin has done better against the run (14 stops and only 1 missed tackle). I think Raiders fans will look and see Ferrell has 0 sacks this year and say Crosby is better. This isn’t true. Ferrell actually has 24 pressures and 7 QB hits compared to Crosby’s 28 pressures and 4 QB hits. Crosby has also missed 8 tackles this year and has had struggles being able to set the edge against the run. I believe that Ferrell will become the better player as soon as next year, and should be a cornerstone of this defense for years to come. Ferrell has a slightly higher pass rush productivity (5.2) than Crosby (5.0) which shows that the two players are similar. However, so far this year, Ferrell has a higher pressure rate than Crosby (0.097% vs 0.076%), and more QB hits (7 vs 4) on 120 less pass rushing snaps. This indicates that Ferrell should have the better career going forward

Overall, the Raiders looked strong coming into the Falcons game, but now who knows what can happen. If we do another comparison regarding weeks 13-17 for this year and last year, there are more similarities in which Raiders fans could be going through Deja Vu again.

Ultimately, the Raiders chances will come down to the offense and whether or not they can sustain the success they had in the redzone first portion of the season and overcome their defensive deficiencies. They should be getting Trent Brown back soon who’s injuries have been a mystery all season. It’ll help if Derek Carr keeps playing at a top 10 level like he has been all season. 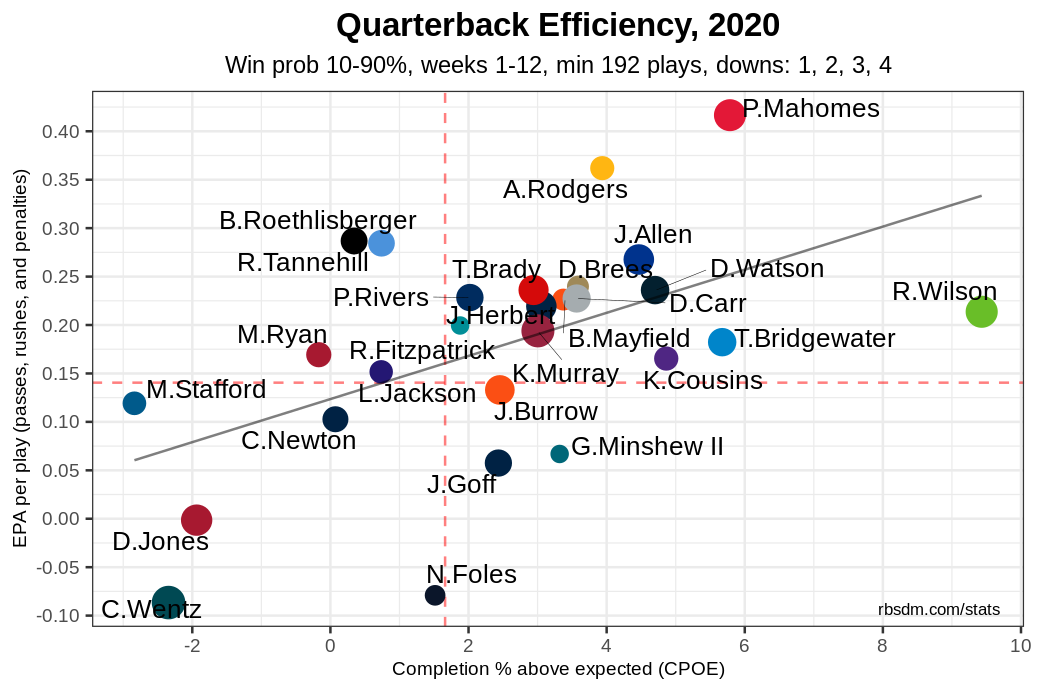 Josh Jacobs recently had an ankle sprain, but the early reports indicate that it shouldn’t be that big of an issue. However, if you remember, Jacobs was banged up going down the stretch and missed 3 games because he played injured. It might be wise to rest Jacobs and start Devontae Booker this week against the Jets. The defense is likely to stay in the bottom 10, unless something magical happens and they start playing exceptionally well.

My prediction: I think the Raiders finish 8-8. I do not think their defense is good enough to carry the offense when they are struggling, and the team is still very young but definitely ascending.

It will be very interesting to see if Carr and Gruden can pull off a playoff berth, but it will be a tall task to do if they play like they did in week 12.

Stay tuned for their week 13 matchup vs the New York Jets this weekend.