The biggest question heading into this past offseason was which team Tom Brady would decide to play for in 2020. In the end, he picked the Tampa Bay Buccaneers and a new era started for a team that hadn’t made the playoffs since 2007. The Bucs were instantly considered Super Bowl contenders and have lived up to the hype with a 5-2 record to start the season. However, the question must be asked: Has the Bucs offense or defense played better so far this year?

As seen in the graph, the Bucs had an above average defense coupled with an average offense. The offense had a star WR duo of Mike Evans and Chris Godwin who were the only WR duo last year to finish in the top 20 of Pro Football Focus’ receiving grades.

Despite throwing 30 interceptions, Jameis Winston finished slightly above-average for both CPOE and EPA/play. Another plus for the offense last year was their offensive line who finished 7th according to PFF’s end of the season rankings. According to Football Outsiders, the Bucs defense had the worst average opposing line of scrimmage starting point in the entire league at 31.70. This means on average, the opposition started their drive at roughly their own 32 yard line. Despite this, the Bucs still finished the year with the 6th best defensive DVOA per Football Outsiders and had the best rush defense with an EPA at -0.245. Shaquil Barrett led the league in sacks with 20 and finished with a top 10 pass rushing grade among all edge rushers per PFF. Lavonte David finished with the single best coverage grade by PFF among all LB’s, and NT Vita Vea finished with a 77.7 pass rush grade in only his second year in the league.

Moving on to this year, the Bucs spent their offseason building up their roster. Offensively, they drafted Tristian Wirfs to be their future right tackle, traded for Rob Gronkowski, and maintained their offensive line. Defensively, it was all about keeping their defense intact as their only major addition was rookie Antoine Winfield Jr.

Overall, the Bucs defense is in contention right now to be the best defense in the NFL. 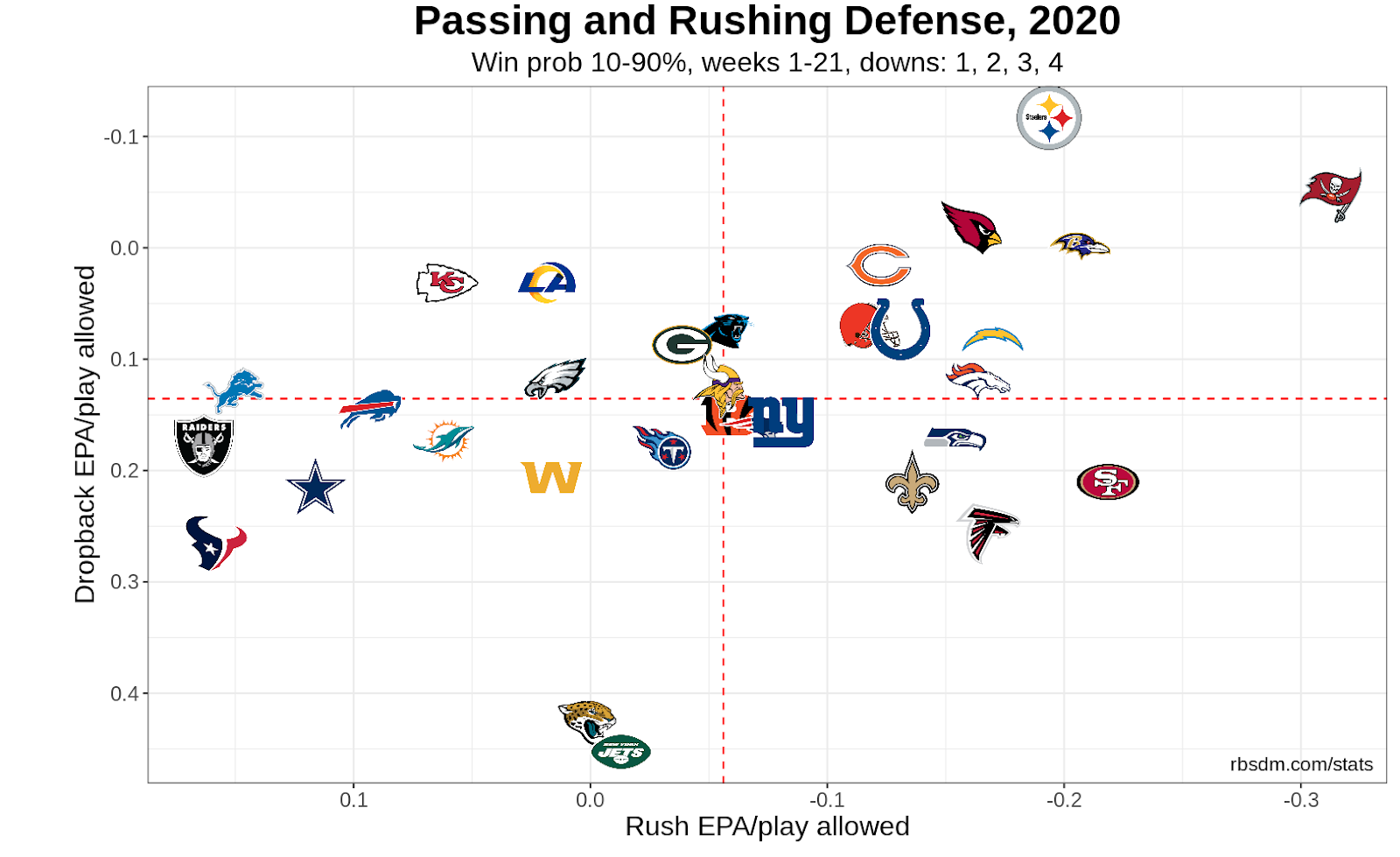 The graph shows that in non-garbage time, the Bucs are first in EPA/rush and second in EPA/Dropback. Their very young secondary cannot be underestimated as Jamel Dean (66.7 passer rating when targeted) and Carlton Davis (54.3 passer rating when targeted and 3 INT’s) are among the NFL’s top CB duos in the league as of right now. As of week 6, the Bucs have continued their stellar run defense from 2019 and are currently the best defense in EPA/rush at -0.311. They are also second only to the Rams in EPA per dropback at -0.056. In a year with offensive explosion, the Bucs have become a rare defense that can stop both the run and the pass.

Their defensive success ultimately comes from the ferocious front seven that the Bucs possess. Before Vita Vea getting injured, there was an argument to be made that the Bucs had the best front seven in the league. On top of that, Devin White and Lavonte David are among the scariest LB duo’s in the league as they are top 10 in run stop percentage among LB’s. Lavonte David might be the best off-ball LB in football this season and he’s been underrated for so long. Among LB’s that have played at least 120 snaps this year, David is first in passer rating allowed at 55.3, 3rd in yards per coverage snap at 0.53, and has a 90.6 coverage grade by PFF which ranks #1 of all LB’s.

Now onto the offense. The Bucs haven’t been as good offensively as people think. If you look and see that they’re putting up 29.5 ppg, there’s an inclination that the offense if thriving and Brady is getting acclimated to Bruce Arians’s vertical offense quickly which isn’t the case. To put it simply, the Bucs haven’t been a very efficient offense so far this year. Taking a look at this graph, you can see that the Bucs rank near the middle of the pack in both EPA/Rush and EPA/Dropback. 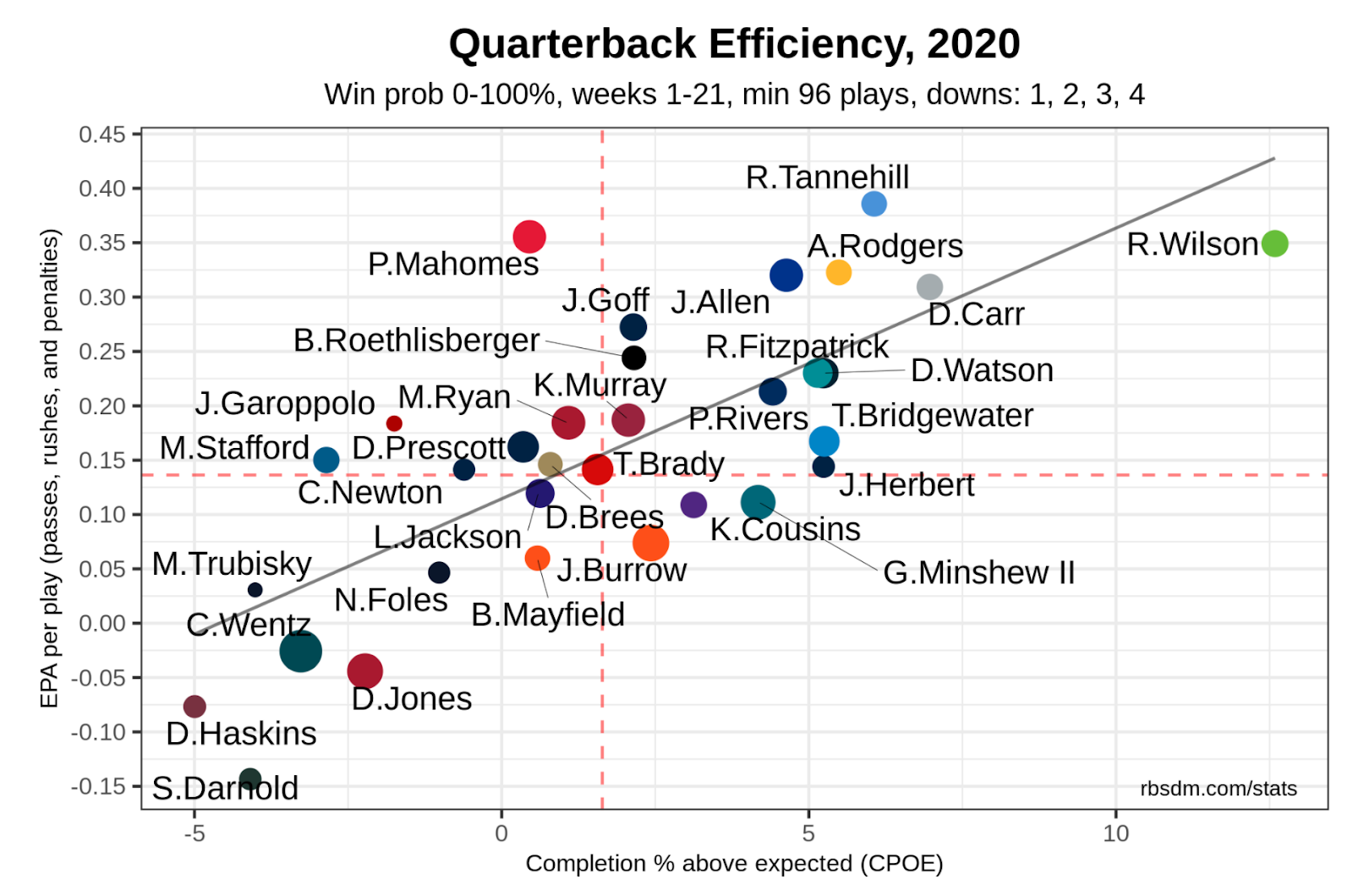 As for Brady, he has the 15th best EPA/play + CPOE composite. It will be interesting to see how explosive the Bucs offense will be with Chris Godwin fully healthy and Antonio Brown joining the team after week 8. The loss of OJ Howard for the year will likely eliminate the 3 TE packages the Bucs ran 78 times prior to week 7, which was 4th in the league per Sharp football stats. Godwin really does change the offense as a big slot receiver and Brady has always loved his slot receivers (Welker, Edelman). This offensive line is one of the best in the league (9th best pass block grade and 8th best run block grade per PFF) and Jason Licht should be ecstatic to see how well Wirfs has been able to transition to the NFL. Wirfs has had some great games like against Joey Bosa, and his only subpar game where he graded out bad by PFF (59.1 game grade) game against Khalil Mack.

In total, the defense has been playing at a high level this year and can hopefully stay healthy to keep it that way.  An achilles tear ended Justin Evans’s season but had he been healthy, we would’ve been able to see a very dangerous and versatile Bucs defense that would cause problems to any offense they play. Vita Vea’s loss will be noticeable but there are stopgaps that the Bucs can employ to fix that issue as seen by the trade for McLendon. Ultimately, this Bucs team will be one to watch out for in the NFC South and it should be a very fun race to the playoffs against the Saints for the division crown.

Stay tuned for their week 8 matchup vs the New York Giants this weekend.